Nine Signs of Abuse in Children

Child abuse doesn't only affect the sufferer, but the entire environment where the abuse is inflicted. An abused child may become an abuser in the future. 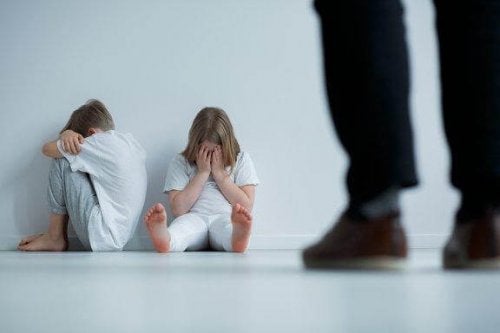 It’s overwhelming to think that a child, an innocent and vulnerable being, can be attacked and hurt by their loved ones. Unfortunately, abuse in children is more common than we’d like to imagine. It may even occur right before our eyes, in our community, and even within our own family.

Child abuse occurs in all socioeconomic levels, cultures, and genders. In fact, according to the World Health Organization, (WHO ), a quarter of all adults report having suffered physical abuse as children. In other words, 25% of men and women have been hurt during their childhood.

Fortunately, there are some warning signs that can help detect it.

How to Detect Abuse in Children

Beyond the obvious, you might be asking yourself if shouting at or spanking a child is considered abuse. To have a clearer picture, you can review the types of abuses that are considered harmful to children’s physical and mental health:

Nine Signs of Abuse in Children

“Every night I heard the children’s screams and something I believed to be strong blows,” said one mother regarding her neighbors. Since she suspected child abuse, she called the authorities. Unfortunately, they verified the situation.

“When a 7-year-old boy opened the door and I saw his lively and sweet appearance, I thought it was impossible that he was being abused,” said the mother.

Intuition often helps people detect harmful situations. However, it isn’t enough to detect whether a child is being abused or not.

When a child lives with a toxic family, there are patterns of abusive behavior. Here are nine signs of abuse in children. Let’s review each one of them.

Take a look at this article: Toxic Families and Their Characteristics

Abused children may engage in behaviors that are characteristic of younger ages. Some examples are thumb-sucking, bed-wetting, fear of the dark, or fear of strangers.

An abused child may express apprehension or anxiety. They may also demonstrate signs of anxiety or fear when returning home.

Likewise, they may show an unusual fear of a particular person or place.

The stress, fear, and anxiety that abuse causes can lead to changes in a child’s eating behaviors. This can result in significant weight loss or gain.

An abused child may show signs of tiredness or fatigue due to having difficulties falling asleep.

Excessive absences and inattentiveness in class may be signs of abuse in children.

On the other hand, some abused children may also strive for perfectionism as a way to seek the love and support they are not receiving at home.

6. Lack of personal care and hygiene

Abused children may seem neglected. They may also seem unkempt and not wear proper clothing for the weather.

Children who are abused can dare to experiment with high-risk activities such as consuming drugs, drinking alcohol, or carrying weapons.

Children who have been abused may exhibit overly sexual behavior. They may even use extremely explicit sexual language.

See also: 6 Symptoms That You Are a Victim of Verbal Abuse

The frequent occurrence of burns or bruises can be signs of abuse in children, especially if the explanations of said injuries are unconvincing.

Overall, these nine things we mentioned above only warning signs of abuse in children. However, if it’s proven that a child is being abused, you should act. Even if it’s not, it’s important to ensure that the child is getting the support that he or she may need.

Contact the police, a psychologist or the school counselor. It’s the right thing to do.

Sometimes, children don’t even realize that they’re being abused. In most cases, their own parents or close family members they assume love them are the ones who inflict the abuse. Thus, the psychological impact is greater, which is why its invisible scars can remain into child’s adulthood.

Depending on the type of abuse that was inflicted on them, an adult survivor of child abuse may suffer from any of the following psychological problems:

Unfortunately, the most tragic ironic thing that can happen to a person who suffered child abuse is that they become an abuser as an adult. It’s a vicious cycle that can span generations.

Psychological intervention can reverse the effects of abuse and allow early emotional healing. Generally, this allows the sufferer to explore feelings of anger, pain, frustration, and fear that affect them to regain a sense of safety.

In addition to psychotherapy, meditation techniques, role play, and support groups can also be helpful. Art can also allow the development of hidden artistic talents that emerge during healing.

Overall, parents should be aware of how much their upbringing can influence their children’s future. After all, they must always keep in mind that the person they’re raising will become an adult. Then, they’ll raise their own family with what they know to be love, care, and respect.

This is why you should be attentive to your parenting techniques and how you were raised as a child. Above all, you should seek professional guidance when you deem it necessary in order to ensure that patterns of abuse don’t continue.

7 Invisible Effects of Psychological Abuse
Often the victim of psychological abuse has an elevated feeling of guilt that prevents her from leaving the relationship and can even lead to depression. Read more »
Link copied!
Interesting Articles
Children
Vitamin D Deficiency in Children: A Growing Problem