A Natural Remedy to Burn Fat and Reduce Abdominal Bloating

Many people believe that cinnamon and laurel tea helps stimulate urination and promote the elimination of retained fluids from the body. 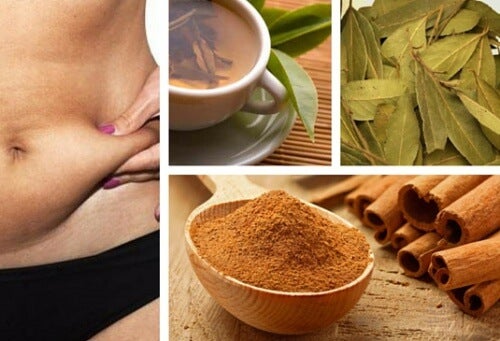 Exercising every day and adopting healthy eating habits are two fundamental guidelines in order to lose weight healthily and eliminate excess fat accumulated in certain areas. Additionally, some people consider that they could also resort to certain supplements, such as the natural remedy to burn fat and reduce abdominal bloating that we’ll be talking about in this article.

This remedy is quite common in any modern grandmother’s medicine cabinet. That being said, it combines ingredients that are not only medicinal but also very aromatic and easy to find in any kitchen and supermarket.

Burn fat and reduce abdominal bloating with this natural remedy

The following remedy has digestive and anti-inflammatory properties. For that reason, many consider it a good complement to a healthy lifestyle when looking to lose weight. It contains with natural ingredients that have good nutritional value.

According to data from the Spanish Nutrition Foundation:

Why cinnamon and laurel?

Laurel has diuretic and anti-inflammatory properties that, in addition to facilitating digestion, contribute to the elimination of retained fluids in the body and kidney function in general.

On the other hand, cinnamon is a spice that also has anti-inflammatory and digestive properties. Additionally, it’s very famous for its delicious aroma and slight spicy flavor.

As of now, many individuals consider that its regular consumption could perhaps help to lose weight. This is because it’s considered to have valuable compounds that contribute to various processes. In addition, studies have shown its usefulness in regulating cholesterol and blood sugar.

As of now, it’s considered that its consumption can help control the anxiety to eat. In this way, it controls calorie intake and keeps you from consuming foods that prevent weight loss.

When ingested, it’s said to trigger a chemical reaction with the stomach that speeds up metabolism. Also, experts believe cinnamon is beneficial because it:

Note: before consuming cinnamon regularly, we advise you to inform yourself well about its contraindications in order to consume it safely. Another option would be to consult with your doctor.

Check out this recipe to make cinnamon and laurel tea to facilitate weight loss.

Cinnamon contains a chemical known as coumarin, which can be toxic if consumed in large quantities. Therefore, you should never exceed the recommended dosage of this tea.

Also, its consumption isn’t recommended if you’re under some type of pharmacological treatment because there could be interactions). In additional, it’s not recommended in case of pregnancy or lactation, or for patients with digestive problems such as ulcers or gastritis.

As always, before starting to consume any natural remedy to burn fat and reduce abdominal bloating (or any other objective) it’s best to consult your doctor.

Canary Seed and Cinnamon Water, a Remedy to Clean the Arteries
One of the best remedies to avoid clogging the arteries is consuming canary seed and cinnamon water. In this article, we'll show how to clean the arteries. Read more »
Link copied!
Interesting Articles
Weight Loss
White, Beige, and Brown Types of Body Fat