Mbah Gotho, the Man Who Claims to be 145

Despite claiming to be the oldest person ever known on earth, Mbah Gotho doesn’t know exactly how old he is because there are no records that verify his date of birth. This type of record-keeping wasn’t widely available until the twentieth century. 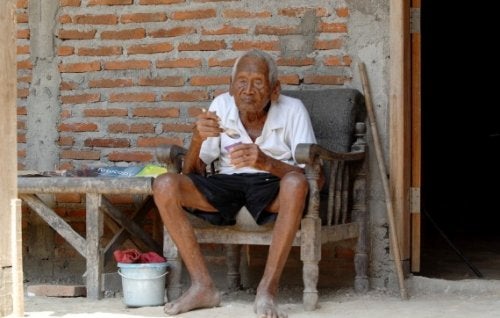 They say death has forgotten Mbah Gotho. They also say that his records are authentic, and this old man is no more and no less than 145 years old.

It’s hard to believe. Despite being used to reading stories about people who have turned a century old, we’ve never heard of such a case.

Now there’s one detail that cannot go unnoticed: Mr. Gotho doesn’t want to live anymore. In his own words, “I wait for death calmly and without fear, although it seems to want to avoid me.”

Many people are eager to learn his secret to longevity, and the answer the protagonist himself reveals is truly beautiful.

Mbah Gotho was born on December 31, 1870. This is what’s written on his ID card and even in the official records of the island of Java, where he lives and was born 145 years ago.

If this is true, he would certainly be the oldest person ever known. So far, the record is held by Jeanne Calment (1875-1997), a Frenchwoman who passed away at the age of 122.

You might be wondering why Mr. Mbah Gotho isn’t in the Guinness Book of World Records.

The answer is simple:

Despite not holding that record for the “oldest man,” everyone accepts that his age is authentic. Mbah Gotho is about to turn a century and a half old. It’s absolutely amazing.

Many family members left behind

A long life offers one many opportunities. It allows you to learn, correct mistakes, amend failures, and even “reset” your life many times. Mbah Gotho has led, according to him, a good life, but now he has only sad memories.

When he wakes up every morning, he must accept the infinite memories of people who no longer exist. They are echoes of a past that remind him of his long life and force him to wonder why.

Why is he still here, while those who loved him so much now have been at rest for a long time?

Mr. Mbah Gotho is resigned to his humble life, surrounded by his grandchildren and great-grandchildren.

The secret of the longevity of Mbah Gotho

There are two ingredients, he explains, to his long life:

Mbah Gotho tells us that he has always been an infinitely patient person. He’s always focused his existence on accepting, on letting things go at their own rhythm, on observing calmly, and not getting angry.

So much so that his own grandchildren say with humor that their grandfather never complains about anything. Accept everything that others offer you to eat and receive love without asking for anything.

A clear mind that wishes to go

The only wish that Mr. Gotho has carried with him for more than 20 years: a headstone and a place to rest when death comes to close his eyes and reunite him with his family.

His people appreciate him because he is a hero who fought against invaders – he fought against the Japanese in the war. Additionally, throughout his life, he worked with his hands to support his family.

See also The best age is your current age

Despite all the admiration of his people, however, we can all understand his desire. He says his life weighs on him and the years have brought him fatigue, aging, and most significantly, separation from his loved ones.

The oldest man in the world just wants to close his eyes, because his has been a full life. Like any great warrior he simply craves the rest that he deserves.

True Love: Couple Married 75 Years Die Same Day
For many, true love only happens in fairy tales, but this couple married 75 years proved otherwise when they died within 24 hours of each other. Read more »
Link copied!
Interesting Articles
Did you know?
Why Do We Have Armpit Hair?