Find Out How to Make a Potato Light

While the potato light can be used to illuminate a room, some people don’t see any purpose for potatoes other than as a food. 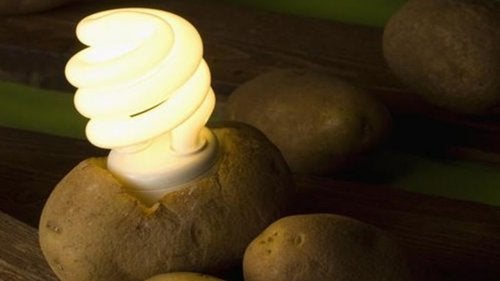 If you liked your science classes when you were at school, then this little experiment is for you. All you need is a potato. Haim Rabinowitch, of the Hebrew University of Jerusalem, Israel, has been working for years to create a device capable of extracting the energy that’s stored in potatoes. Read on and find out how to make your own potato light!

This study was born from the idea to help people who don’t have access to electrical grids. According to Rabinowich, you simply connect this root vegetable to a pair of wires, screws, and of course, an LED bulb to provide artificial light in a wide variety of places.

The study found that a single potato light could be used to illuminate a room for approximately 40 days.

How to make a potato light

What do you need?

How to make it?

See also: How to make a light jar to decorate your rooms

The potato doesn’t actually generate electricity. It contains ascorbic acid. Using the copper electrode and zinc, electrons move from one place to another using this natural product as the power drive.

This phenomenon is known as a “redox reaction,” and has the ability to turn on and power various electrical appliances.

Potatoes are chosen because they can potentially be grown almost everywhere, including tropical and subtropical climates. They are the most abundant crop in the world

Some history on the potato light

Potatoes are the number one food used in schools to teach children about science. However, according to Rabinowitch, no one had yet conducted a study on using this vegetable as a source of energy.

Physicists Alessandro Volta and Luigi Galvani had already studied different methods for generating energy back in 1780, such as:

The mystery of the potato light

If this experiment demonstrated the function and utility of the potato light then why hasn’t it begun to be used everywhere? According to Rabinowitch, they just need “research and dissemination so that people will begin using potatoes to produce large amounts of energy, especially in areas where electricity is not available.”

However, there are many people who oppose this method to generate electricity from food. Critics say that biodiesel takes food away from hungry or famine-affected populations to produce energy. They consider that it is neither a successful nor an appropriate decision.

Statistics show that there are around 360 million tons of potatoes produced a year throughout the world, however. In addition to being easy to store and long lasting, they are cheap to produce. This is why this kind of technology could be economically viable to develop and implement in places that lack electricity.

The manufacture of zinc and copper rods is also a little cheaper than a kerosene lamp. The problem, however, lies in the fact that using food to light up a room doesn’t appeal to the majority of the population.

Read more: Discover the Properties and Benefits of Zinc

“It’s a low voltage supply, but it’s enough to build something that could charge mobile phones and laptops in places where there is no electricity.”

Learn How to Enjoy Flavorful and Healthy Potatoes
Fried, baked, boiled, with or without skin, different varieties...what is the best way to eat healthy potatoes without sacrificing its flavor? In today's article, we'll share some simple and original ideas to take advantage of all of the properties that potatoes have to offer.  Read more »
Link copied!
Interesting Articles
Did you know?
New Year's Traditions Around the World