Learn How to Make Quinoa Milk and its Benefits

Besides being gluten-free, quinoa milk gives you significant amounts of calcium and dietary fiber. These are good for helping take care of both your bones and your digestive health. 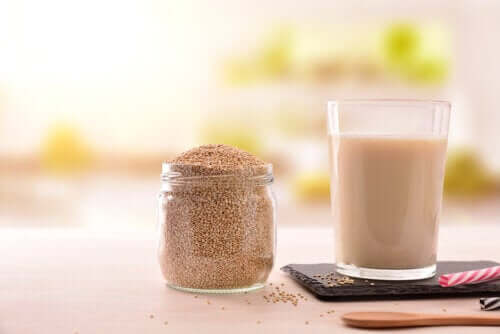 Quinoa milk is a vegetable drink that you can prepar easily at home. It’s a valid alternative to vary the diet and, at the same time, complement it.

Although quinoa (or quinua) is often used in cooking in the same way as cereals, it’s actually a pseudocereal. It is a gluten-free food, which contains a large amount of proteins and other nutrients necessary for the health of the whole organism. For this reason, it is one of the most recommended ingredients for vegetarian and vegan diets.

According to a report by the Food and Agriculture Organization of the United Nations (FAO):

In view of the above, there are those who consider quinoa (and its different formats) a true “superfood”.

Best of all, it’s very easy to digest. It has few calories, and is good for people with celiac disease. If you haven’t yet incorporated it into your diet, take note of the benefits of quinoa and the delicious recipe we’ll show you!

We also recommend: All About Celiac Disease or Gluten Intolerance

Quinoa milk: A vegetable drink with many benefits

Unlike other vegetable milks, quinoa milk is a drink that’s rich in proteins, fiber, and antioxidants. With a small number of calories, it’s a significant source of:

Making quinoa milk is very easy. It doesn’t take much time, and its ingredients are easy to find at your supermarket.

The original recipe is made with water and quinoa. However, today we’re going to suggest adding an extra touch of flavor with a little vanilla and cinnamon.

What are the benefits of quinoa milk?

Due to its complete nutritional composition, regular consumption of quinoa milk brings many benefits to the body. Take note of the following:

Contributes to muscle and bone health

Given its protein content, quinoa milk contributes to strengthening and stimulating the growth of muscle mass. This makes it a recommended food for athletes and people with a very active lifestyle.

Also, some of its nutrients have anti-inflammatory properties that can contribute to the relief in case of suffering any type of discomfort related to the muscular apparatus.

At the same time, quinoa milk can be helpful in relieving constipation and digestive disorders, as it provides dietary fiber and other substances necessary for optimal functioning of the stomach and intestine.

It’s also one of the best supplements for healthy weight loss. This is because its caloric intake is minimal, it’s very satiating, and its nutrients support the function of the metabolism.

You should also know that it can be useful against dehydration and diarrhea, since its minerals and other nutrients help the body to recover.

Discover more: How to Make Quinoa and Garbanzo Meatballs

Finally, we can’t forget that the omega-3 fatty acids in quinoa milk help control cholesterol levels, as well as other problems that affect cardiovascular health.

At the same time, if you want to stop drinking cow’s milk, quinoa milk is a very interesting alternative, since it’s lactose-free and contains calcium and other essential minerals.

It’s also possible to incorporate it into your beauty routine, not only because it’s believed to help regulate the pH of the skin, but also because it could help fight excess oil.

According to popular beliefs, when applied to the hair, it helps to moisturize the hair when it’s dry. It also helps to prevent loss of volume.

Need more reasons to prepare it? Let’s get to work! Follow the steps and enjoy its benefits from now on.