Learn All about Cervical Spinal Nerves

The cervical spinal nerves go from C-1 to C-8. They consist of sensory and motor fibers, meaning they're mixed nerves. Read on to learn more! 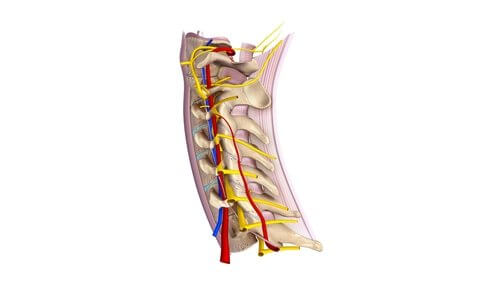 Cervical spinal nerves are a group of eight spinal nerves from the eight cervical vertebrae that originate in the spinal cord. These eight vertebrae, C-1 through C-8, start from the base of the skull.

All cervical spinal nerves, except C-1 (which normally has no dorsal root), are linked to a dermatome. A dermatome is an area of skin supplied by a spinal nerve.

So, cervical spinal nerves encompass eight spinal nerves, and these, in turn, are a set of nerves (approximately 31 to 33 nerves) that belong to the somatic nervous system, whose function is to innervate different parts of the body.

They’re composed of a sensory root and a motor root. The sensory roots give sensitivity to the muscles they innervate. In addition to this, the motor roots allow the muscles to contract automatically. Thanks to this composition, they achieve their goal.

You may also want to read: Smoothies and Teas for the Nervous System

The cervical nerves share the same characteristics as all the other spinal nerves.

First of all, as we already mentioned, they’re mixed nerves. In other words, they’re composed of both sensory and motor fibers.

Second of all, all the divisions of the ventral rami, except the thoracic nerves (T1 to T12), form several branches known as nerve plexuses. These plexuses appear in the cervical, brachial, and lumbo sacral areas.

Within these interconnected branches, the fibers that originate in the ventral branches intersect and redistribute so that each resulting ramus contains fibers of different spinal nerves.

In addition, those from each ventral ramus travel to the periphery of the body by way of different routes on the branches.

For this reason, each limb muscle with be stimulated by more than one spinal nerve. Consequently, if there’s damage to one of the segments of the spinal cord or in one of the rami, the tip doesn’t have to remain completely unused.

The ventral rami of the first four spinal nerves form the cervical plexus. Its branches are skin nerves that stimulate the skin of the following areas, thus transmitting sensory impulses:

In addition, other branches supply the anterior muscles of the neck. Also, the phrenic nerve fibers, that group fibers mainly from C-3 and C-4, originate from the cervical plexus. The phrenic nerve passes between the chest to the diaphragm, the most important respiration muscle.

You should also read: Effective Infusions for Improving the Nervous System

The ventral nerves of the cervical spinal nerves C-5 and C-8, along with the anterior ramus of T-1, form the brachial plexus. Its roots are responsible for providing energy to the shoulders and upper extremities.

Finally, the dorsal cutaneous branches are responsible for the stimulation of the cervical facet. Also, from these roots, muscle branches from the head and neck originate, as well as the skin comprised between the vertex (uppermost surface of the head) and shoulders.

Division of the cervical spinal nerves

Then, these ganglia divide into:

In conclusion, cervical nerves are an important part of the nervous system. We hope you’ve enjoyed learning about them and seen the importance of looking after them in order to avoid different illnesses and conditions.

Smoothies and Teas for the Nervous System
Today, we have some great smoothies and teas for your nervous system. But remember: prevention is the best solution for potential health problems. Read more »
Link copied!
Interesting Articles
Anatomy and physiology
Normal Prolactin Levels and Why They Can Change