Is Pregnancy Possible with Amenorrhea?

Menstruation is an indication that the ovulation stage is over, therefore, its absence alarms many women. Have you heard about amenorrhea? Have you ever wondered if pregnancy is possible in women with this condition? Find out below. 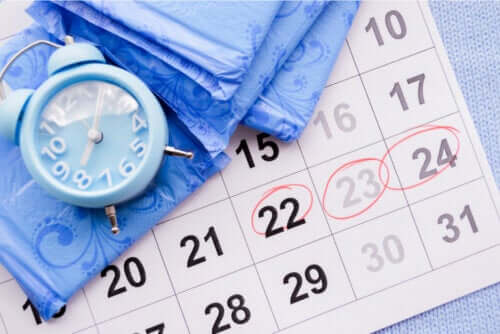 Lack of menstruation, also known as amenorrhea, is a source of concern for many women. This is due to its association with infertility. Thus, many wonder if pregnancy is possible with amenorrhea. So continue reading to find out.

As you probably already know, women go through a period of ovulation every month. Fertilization can occur during this time if they have unprotected sex. The end of this period is marked by menstruation, which is the expulsion of the superficial layers of the endometrium.

A simple way to define amenorrhea is as the absence of menstruation. However, this is one of the main reasons why women consult an ​​OB-GYN, and it’s a source of concern in those who suffer from it.

In most cases, the presence of amenorrhea is an indication that ovulation didn’t occur during that month. Thus, people associate it with infertility. This isn’t always the case, though.

The absence of the menstrual cycle can occur during certain physiological states, such as infancy, pregnancy, lactation, perimenopause, and menopause.

Types of amenorrhea and their main causes

Because women go through menstruation throughout most of their lives, specialists have classified amenorrhea into two types. They’re age-based and have different causes.

This constitutes the absence of the first menstruation in young women who are 16 years old, under normal development, and secondary sexual characteristics. However, there’s probably amenorrhea if they haven’t any pubic hair by the age of 13.

When dealing with young adolescents, most of the causes of primary amenorrhea originate in the presence of congenital malformations or genetic alterations. In this respect, some of the most common causes are:

Secondary amenorrhea is the absence of menstruation for at least 3 months in women who’ve had regular menstrual cycles before. Most of those afflicted by it are between 25 and 35 years old.

The main cause of this symptom is pregnancy since pregnant women won’t ovulate during the entire gestation. However, it could also be due to breastfeeding, menopause, and the use of birth control pills. In addition, there are certain predisposing factors, such as obesity, stress, anxiety, and intense exercise.

When the cause of amenorrhea isn’t physiological then it could be due to an acquired disease. Thus, the cause for the second variant could be any of the following pathologies:

So is pregnancy possible with amenorrhea?

Now that you know what amenorrhea is and what its types and causes are, it’s time to answer this question. Of course, the answer still depends on the type of disorder and its cause.

A woman can get pregnant when primary amenorrhea is due to a congenital malformation or imperforate hymen. Ovulation is occurring normally but blood isn’t being expelled. Furthermore, the solution is usually surgery.

However,  it’s impossible to get pregnant naturally when primary amenorrhea is due to gonadal dysgeneses, such as Turner syndrome. However, there’s the possibility of doing it by artificial insemination with egg donation.

It’s only necessary to eliminate the cause to regulate menstrual cycles and thus achieve conception when secondary amenorrhea is due to drugs or some other predisposing factor. On the other hand, if it’s due to polycystic ovary syndrome or thyroid pathologies, then it’s a lot more difficult to get pregnant.

It’s not impossible though. A woman with this problem will mainly require constant medical supervision in order to treat the underlying pathology.

Finally, you must consider several factors when amenorrhea is the product of a prolactin-producing tumor. This is because pregnancy will only be possible if it’s a microadenoma or a small tumor in this case. In addition, the woman must begin medical treatment to try to control it.

Find out How to Calculate Your Fertile Days

The presence of amenorrhea isn’t always an indication of infertility. Conception will be a bit more difficult but it’s only necessary to eliminate the cause of amenorrhea and regulate the menstrual cycles in order to achieve it. In most cases, the woman will just have to initiate the appropriate treatment and have periodic medical checkups.

In addition, there’s always the option of performing artificial insemination in those cases of amenorrhea in which a natural pregnancy is impossible — such as Turner syndrome. Currently, medical advances and surgical options make it possible to improve the prognosis of pathologies that were previously unconquerable.