How To Know if You're Ovulating

Knowing when you're ovulating can help you both to avoid and to plan a pregnancy. Do you know what day of the menstrual cycle you ovulate? In this article we'll tell you everything you need to know. 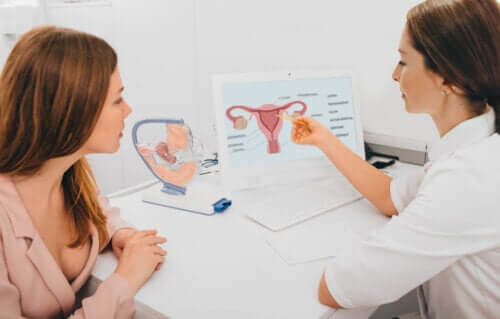 Whether you’re trying to get pregnant or hoping to avoid it, it’s important to know how your menstrual cycle works. If you know if you’re ovulating, you can increase your chances of conceiving or use additional protection, since these are fertile days in which the body has everything it needs for fertilization to occur.

What are the symptoms of ovulation? At what point in the menstrual cycle does it happen?

In this article, we’re first going give you a brief overview of the characteristics of a normal menstrual cycle. Then, we’ll see when ovulation occurs and how to know if it’s occurring.

The normal menstrual cycle includes a series of changes that occur in women of childbearing age, every month, preparing them for the possibility of carrying out a pregnancy. These changes are due to the presence of different female hormones, which increase or decrease in the blood, determining the different moments that occur during the cycle.

Characteristics of the menstrual cycle

The brain (hypothalamus and pituitary gland) and ovaries produce these hormones. In most cases, the menstrual cycle has the following characteristics:

Don’t miss: How to Regulate Hormones through Exercise

Ovulation is the release of one or more eggs from the ovaries, and it occurs every month. Said egg will remain for a short time waiting to be fertilized by a sperm.

Menstrual cycles vary from woman to woman and month to month. This variation occurs, above all, in the first phase, which is the follicular phase. As we mentioned before, this is the phase that includes ovulation. Therefore, calculating ovulation can be difficult. Later we’ll see how to know if you’re ovulating.

In addition, there are also variations according to the stage of life each woman is in. In the first few years of childbearing age, the cycles will be longer, and then they will get shorter.

We know that the greatest possibility of pregnancy occurs between three and five days before the day of ovulation, including the day of ovulation. Therefore, it follows that if you track that period, which we’ll call the fertile period, you’ll maximize the chances of conception.

How do you know if you’re ovulating?

The first thing we’ll say is that there are no reliable home methods to predict the day of ovulation. Therefore, predicting the fertile period won’t be perfectly exact, unless you can identify the hormonal changes that occur in this period.

We should clarify that keeping a calendar and counting the days to identify the fertile period hasn’t proven to be a reliable method, since, as we already mentioned, it changes from month to month.

On the other hand, the basal body temperature method isn’t reliable either. There are new cell phone apps that check body temperature, but they aren’t 100% reliable, either.

You can also measure female hormones in urine, with a kit similar to the one used to detect pregnancy. It’s called an ovulation kit and it serves as a predictor of the fertile period. They’re quite affordable price-wise. However, they can give false-positive results.

Discover: What Can You Do about Painful Ovulation?

It’s important to consult your gynecologist

Home body temperature and vaginal discharge methods can work together to tell when you’re ovulating, but they’re not entirely reliable. Ovulation kits are more reliable than either method, although you shouldn’t forget that you might get false-positive results. When in doubt, it’s always best to consult your doctor or gynecologist in order to assess the different available possibilities.