Hormonal changes that occur during pregnancy often lead to skin changes. Although most are benign, it's important to take special care. Learn more in this article! 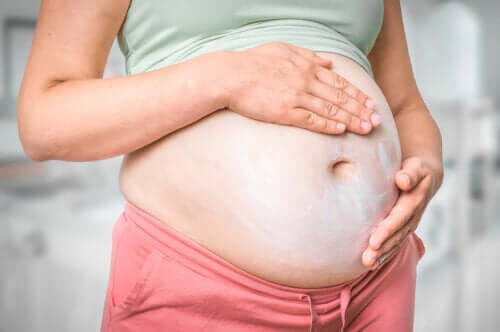 Skin changes during pregnancy are caused by changes in hormonal activity and blood circulation. Often, most pregnant women’s biggest concern is the appearance of stretch marks. However, beyond this, spots, changes in skin tone, acne, and other skin problems can occur.

According to information published in theJournal of the American Academy of Dermatology, these changes are normal and don’t put the mother or fetus at risk. However, as far as aesthetics are concerned, they’re significant to many people and, in fact, some prefer to seek solutions with the dermatologist.

In this article, we’ll tell you all about it.

Why do skin changes occur during pregnancy?

The placenta acts as a hormonal organ and produces an increase in adrenal and pituitary activity. In addition to the function of the endocrine glands of the fetus, it causes an increase in corticosteroids, accelerated metabolism, and an increase in the levels of progesterone and estrogen, hormones responsible for changes in the skin during pregnancy.

The most common skin changes during pregnancy are benign and pose no risks beyond aesthetics. However, as an article published in American Family Physician explains, there are pre-existing skin diseases, as well as specific dermatoses of pregnancy that do require vigilance due to the risks they carry.

Considering the above, it’s best to consult a doctor or dermatologist in the event of any skin abnormality.

Let’s take a closer look at some common changes.

Most occur in the abdomen area. They’re most noticeable in the third trimester of pregnancy. They can be located on the breasts, hips, and buttocks. These stretch marks appear as the pregnancy progresses and weight increases.

They can be pink or purple in color. After giving birth, they’ll start to fade and won’t be as noticeable. However, in some cases, they don’t go away completely. For this reason, it’s important to prevent or treat them at the right time.

Their appearance will depend on the type of skin, its elasticity, and family history. Indications to reduce the chances of developing stretch marks include the following:

These are small pedunculated papules, sometimes elongated, brown, or the color of the skin, which usually appear in the folds of the neck, armpits, or the under the breasts, starting around the second trimester. Many may disappear during the puerperium.

This is more common in women with dark skin and hair. The linea alba (located in the middle of the abdomen, vertically, from the pubic symphysis to a few centimeters above the navel), the periumbilical area, the external genitalia, and the areolas become more intensely pigmented.

From the fifth month, an enlargement of the color of the mammary areola appears, called the secondary areola. Brown or yellowish spots can be seen on the forehead, cheeks, nose, or upper lip. This is called a pregnancy mask or chloasma.

To prevent these changes in pigmentation, we recommend you avoid exposing yourself to the sun for long periods of time, use sunblock with a high protection factor (50 SPF), a hat and clothing that protects your skin. In the months after delivery, they may fade and improve, but some women will still have small freckles.

All these changes in pigmentation are the product of the hormonal alteration that takes place during pregnancy. This stimulates the production of melanin for a short time, which gives color to hair, skin, and eyes.

In a study published in the International Journal of Dermatology, pigmentation changes were the most evident change in patients. Some women may notice an increase in the size, number, and activity of their moles. They tend to darken and enlarge. If they start bleeding, we recommend you go to the dermatologist as soon as possible.

During pregnancy, blood volume increases, vascular dilation occurs, capillary permeability increases, and there’s new vasculature. These changes in circulation are responsible for the appearance of edema of the limbs, varicosities, palmar erythema, and ruby points or telangiectasias.

To improve these symptoms, we recommend the following:

Most of these changes in the skin disappear after about 6 months to a year. If they stay longer, you can treat them with measures recommended by your dermatologist.

This condition is common during pregnancy because the sebaceous glands of the skin are stimulated and increase their production of sebum. This can occur in any trimester of pregnancy and can be mild, moderate, or severe.

You should read: Why Women Get Acne During Their Periods

This is a bluish mottled discoloration of the skin that can occur during pregnancy. It happens predominantly on the legs, during exposure to cold. It usually subsides in the puerperium, if not, you should see a dermatologist to rule out other causes.

During pregnancy, the skin looks brighter. This is due to two main factors. First, the stimulation of the sebaceous glands, with the consequent increase in sebum production. On the other hand, blood flow increases in the epithelium, which causes more oxygenation of the skin cells.

Taking care of your skin during pregnancy is important

Although most skin changes are considered normal during pregnancy, it’s important to maintain a routine of care, which includes the use of special products. Fortunately, there are many treatments available today which will protect your skin during pregnancy. In addition, it’s always helpful to visit the dermatologist.

The Importance of Diet in Pregnancy
Eating a healthy diet in pregnancy meets the nutritional needs of both mother and fetus. In this article, discover more about this topic! Read more »
Link copied!
Interesting Articles
Pregnancy
Exercising While Pregnant: Is it Safe?