Is Creatine Safe for the Kidneys?

Much is said about the incidence of creatine for the kidneys, wrongly pointing out that this nutritional supplement damages them. This isn't true, but it doesn't mean that precautions shouldn't be taken in some cases. 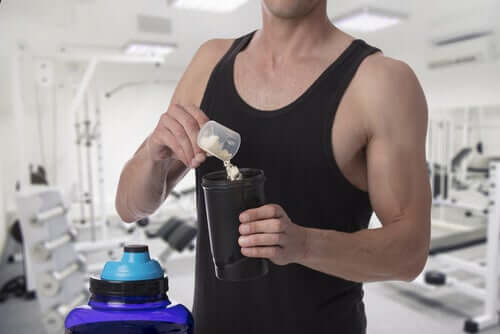 Currently, many people have doubts about whether creatine is safe for the kidneys or not. That’s because there’s a lot of information circulating that claims that it causes damage to these organs. This is basically a myth, but it doesn’t mean that we shouldn’t take precautions.

Let’s remember that creatine is considered one of the most effective dietary supplements, capable of contributing to increased strength and muscle mass. It also promotes performance in high-intensity exercise. Despite this, there’s also been talk of the supposed harmful effects of creatine on the kidneys.

Frequent exercisers, especially strength trainers, often have a high-protein diet and use creatine as a supplement. Some have suspected that this could place an excessive burden on the kidneys. So, the key question is: Is creatine safe for the kidneys? Let’s see.

In principle, creatine’s a molecule that’s naturally present in the body. It’s created from some amino acids that are inside proteins. Likewise, we obtain creatine from foods such as fish and meat.

That’s why we have creatine in the form of a nutritional supplement, which is mainly used by athletes to improve performance. This supplement allows them to increase strength, power, endurance, and recovery capacity. It’s not considered a doping substance.

The uses and side effects of creatine

Several investigations have been carried out to establish the effects that creatine, as a nutritional supplement, has on the body. These studies indicate that the main effects of this substance are the following:

If creatine supplementation is used properly, it doesn’t produce harmful effects. However, there may be negative effects of creatine on the kidneys in those who have previous kidney problems.

Likewise, high doses of this supplement, in some cases, cause side effects, such as:

Is creatine safe for the kidneys?

Going back to the question of whether creatine is safe for the kidneys, there are at least 12 studies that address this aspect. All of them conclude that this nutritional supplement doesn’t cause any negative effects on the kidneys of healthy adults.

Nor does it cause harmful renal effects in those suffering from ALS (amyotrophic lateral sclerosis), type 2 diabetes, or in menopausal or postmenopausal women. Despite this, experts recommend caution regarding its consumption in some specific cases.

This warning, as we mentioned above, applies mainly to those who have kidney problems or are at high risk of suffering from them. In particular, if they consume protein in excess. In fact, there’s evidence that excess protein intake, even without creatine intake, accelerates damage in those with kidney problems.

Continue reading: Nutrition and Kidney Failure: Everything You Need to Know

A myth that has spread

There are a large number of publications that state that creatine is always harmful to the kidneys. However, these statements are based on some incorrect information that has spread without real evidence.

Creatine increases the creatinine level in the body, but it does so independently of renal function. However, creatinine level is an indicator of kidney damage, and if someone frequently ingests creatine, it will appear elevated in urine tests, without necessarily being a sign of kidney problems.

Also, the supplement generates fluid retention, and therefore, it’s always important for hydration to be more frequent when taking creatine. But this doesn’t mean that creatine is unsafe for the kidneys.

5 Signs of Fluid Retention
Generalized or localized swelling in certain parts of your body may be one of the signs of fluid retention and should find a way to address the problem. Read more »
Link copied!
Interesting Articles
Taking care of your body
The Causes of Ingrown Hair and its Removal