Low creatinine levels is a pathological condition that often goes unnoticed. A doctor must suspect it and do tests in order to find it. The most dangerous part is it leads to kidney failure and requires immediate treatment. 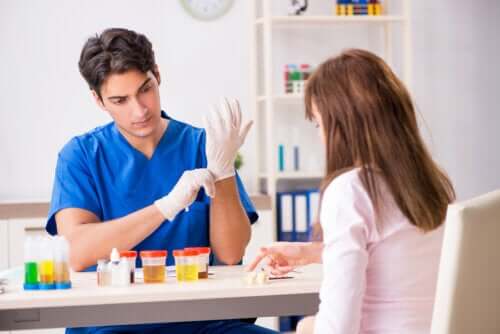 Coming to the conclusion that a person has low creatinine levels isn’t easy and it doesn’t happen immediately in the general population. Doctors usually only measure these values ​among people who already have kidney disease.

Creatinine is a biochemical parameter of blood and urine, which is strongly linked to the kidneys. It’s one of the usual routine exams nephrologists use as a follow-up on their patients’ state of health.

This substance is, in reality, a waste produced by muscle metabolism. Thus, when our muscle fibers work, they generate creatinine as a product that they should subsequently eliminate. The usual route of elimination is through the kidneys and urine.

So, this is how we can track creatinine in the blood and urine to measure it. In the blood, we find it as recently manufactured muscle waste. And, in the urine, we measure how much of it leaves our body.

Even though it’s common for doctors to measure blood creatinine only during general consultations, they should also measure it in the urine when they suspect a kidney disease. For this purpose, the most appropriate method is creatinine clearance.

Through the comparison between the levels of the substance in the blood and urine, we can detect specific abnormalities. For instance, if there’s a low level of creatinine in the urine and a high level in the blood then kidney failure is very likely.

This is a very useful test to detect low urine creatinine levels. All denominations identify the same methods and their objective is to report how much blood creatinine the kidneys are filtering.

To arrive at the result, a doctor must take blood and urine samples. They must collect urine for a full day/twenty-four hours, and then deliver it to a lab for analysis.

Once there, the biochemist will use the corresponding techniques and then apply a formula called glomerular filtration rate. This rate, which is a mathematical formula, measures the filtration power the kidneys might have at any given time.

The expression of values ​​is in millimeters per minute, and the numbers considered normal are:

After doing the corresponding tests and detecting there are in fact low levels of creatinine in a urine sample, then a doctor might suspect:

The treatment for low creatinine levels will depend exclusively on the cause. It’s not the same to treat kidney failure than to treat a deficient diet or a pregnant patient.

You must consult a nephrologist when confronted with renal insufficiency. Some diseases that lead to kidney failure can be treated with medications and special care, while others inevitably lead to dialysis.

The risk is significant in pregnant women. Obstetricians and gynecologists use certain pregnancy-friendly medications to treat kidney disorders. When eclampsia is the clinical picture then they advise hospitalization in order to be in control of the parameters.

Finally, nutritional measures can be evaluated when the diet lacks protein or when there’s a loss of muscle mass. Nutritionists can put together an eating plan with which to increase protein intake, as well as recommending some muscle-toning exercises.

Finally, low levels of creatinine in urine shouldn’t be neglected. Thus, you must follow-up with a doctor and their indications to prevent serious complications.

Things Taken into Account Regarding Urine Abnormalities
There are several types of urine abnormalities. Don't hesitate to consult your doctor if you're seeing changes in your urine. Read more »
Link copied!
Interesting Articles
Illnesses
Causes, Treatments and Symptoms of Oliguria