How to Make Orange-Cinnamon Iced Tea

During the summer, infusions can be an excellent way to stay hydrated. In this article, discover our orange-cinnamon iced tea recipe. 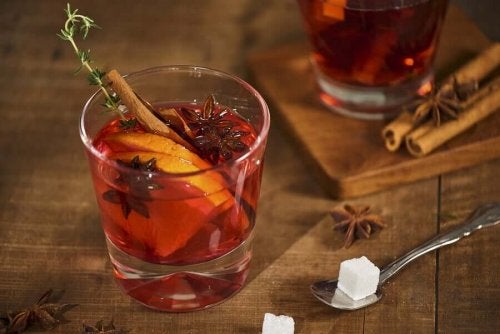 As you probably already know, most of the human body is water. For this reason, it’s extremely important to stay hydrated throughout the year, but especially during the hot summer months. To make hydration more fun and tasty, we suggest preparing this healthy orange-cinnamon iced tea.

Iced teas are excellent options to consume liquids on a hot day to vary the flavor of water a little. If you use fresh fruits and spices to prepare the tea, you’ll add all the benefits of the other ingredients to those of water. Below, we’ll tell you how you can make delicious orange-cinnamon iced tea in an easy and fast way.

The benefits of oranges

Do you remember what your grandmother told you every time you had a cold?

“Drink orange juice. It cures everything!”

She was right. Orange is a source of vitamin C (also called ascorbic acid). In fact, a medium orange contains approximately 82 mg of vitamin C. More than the recommended daily dose!

In addition, oranges contain folate, which is necessary for the formation of blood cells, carotenoids with provitamin A, and antioxidants such as lutein and zeaxanthin. However, that isn’t everything, since they’re also rich in flavonoids.

In recent years, experts have studied oranges and how their consumption influences the human body. Here are just a few of the benefits they’ve discovered:

You may like this article: How to Make a Delicious Vinaigrette with Orange Juice

The benefits of cinnamon

This spice comes from the Ceylon cinnamon tree and has been known for thousands of years. There are reports of its existence in ancient China, 2,500 years BC.

Overall, this spice is rich in iron, calcium, zinc, potassium, selenium, vitamins B6, and vitamin C. Also, it contains chemical compounds, such as phenols and aldehydes.

So, when are you going to make this delicious orange-cinnamon iced tea? Adults and children alike will love it, and it’ll help you stay well-hydrated on hot days. We hope you enjoy this recipe!

Fruit-Flavored Drinks – Everything You Need to Know
Fruit-flavored drinks can be a very good option for hydrating with something more tasty, fun and varied. But are they good for your health? Read more »
Link copied!
Interesting Articles
Infusions
Cold Fruit Infused Water Recipes to Enjoy in the Summer

Infusions
A Ginger, Garlic and Honey Remedy for High Cholesterol

If you tend to have high levels of cholesterol it's vitally important to keep them under control. In this article,…