How Long does It Take to Get Pregnant After Sex?

Fertilization doesn't happen immediately, so it takes about three days to get pregnant after sex. We'll describe the process in this article. 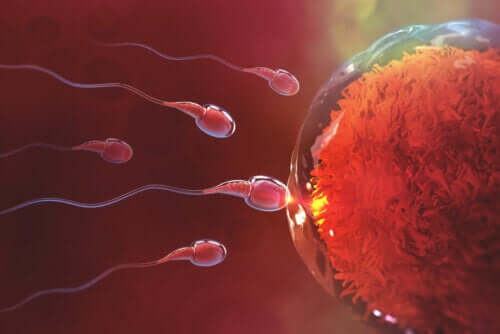 Fertilization is the beginning of being pregnant and is a complex process that takes place after sex. However, contrary to what most people think, it doesn’t occur immediately after the sexual act.

This process consists of an egg (the female gamete) joining with a sperm (male gamete). Pregnancy happens when the genes of both parents come together and form a new cell called the zygote.

There are many questions and myths about how this happens. For this reason, today’s article will explain everything you need to know about fertilization: how long it usually takes, and when the pregnancy symptoms manifest.

How does fertilization occur?

As we pointed out in the introduction, fertilization is the process by which the egg and sperm fuse to form a zygote. It seems simple although it actually requires a series of optimal conditions to take place.

In fact, the probability of becoming pregnant ranges between 20 and 25%, as explained in an article by the Southern California Center for Reproductive Medicine. This figure refers to a situation in which a person isn’t using a contraceptive method.

This is because the gestation process often doesn’t go forward even after fertilization. It’s important to be aware that, for it to take place, the woman must be in a specific stage of her menstrual cycle.

An assisted reproduction company states that this usually occurs around the 14th day of the menstrual cycle — during ovulation. However, sperm can live up to three days in the female genital tract.

An egg only survives 24 hours after ovulation, however. Hence, fertilization takes place within this time frame (1 day), even if the sexual act took place two or three days earlier. We’ll explain all the phases of this process in the following sections.

Searching for an egg to fertilize

An egg comes out of the ovary and goes into the fallopian tubes during the process of ovulation. In turn, the sperm continuously develop in the testicles. They ride in the semen when there’s ejaculation.

Then, they ascend through the vagina into the fallopian tubes — if a woman is there. The process that takes place there is known as “capacitation.” What happens is the spermatozoa undergo a series of modifications in their structure and mobility. This is to acquire the ability to penetrate the egg.

Sperm are unable to do so just after ejaculation and not all of them undergo these transformations. It reduces the probability of several sperm fertilizing the same egg, as this could result in an unviable zygote.

The encounter of the egg and sperm

Sperm goes off, once capacitation takes place, into the crypts of the female genital tract. It heads towards the ovum and the so-called acrosomal reaction takes place.

According to an article by the Bernabeu Institute, this reaction consists of the release of certain enzymes that allow the sperm’s head to cross the oocyte’s membrane. In this way, the nuclei of both cells and the genetic material fuse.

A mechanism is also set in motion during this reaction, one that keeps other sperm from crossing the membrane. As we pointed out in the previous section, this is essential for there not to be problems at the genetic level. We refer to this as polyspermia blockage.

Displacement into the uterus

A cell called “zygote” forms once the egg and sperm fuse and contains genetic material from both parents. Fertilization takes place in one of the fallopian tubes in most cases.

Then, the zygote must descend towards the uterus — the organ in which gestation takes place. The zygote begins to divide along the way and the embryo forms from this single cell by successive cell divisions.

Initially, the name for the two cells from the zygote is “blastomeres.” There are between 12 and 16 blastomeres by the fourth day after fertilization. Then the morula forms and has a central part that’ll give rise to the embryo. The outermost layer of cells will then form the placenta.

Implantation, the final part of the fertilization process

This is an essential step for the embryo to develop. It’s the process by which it attaches itself to the endometrium, the layer that lines the uterus.

It usually occurs 6 to 10 days after fertilization. Note that the embryo will go out with the next period if implantation isn’t successful.

Is it Possible to Get Pregnant Naturally at 45? Read about it and find out!

How long does it take to get pregnant after sex?

The first trimester of pregnancy is usually characterized by a series of symptoms that warn a woman that she’s pregnant, in a way. The first sign is usually the absence or delay of a period. This is referred to as amenorrhea.

It occurs because the production of certain hormones increases to ensure the development of the embryo. These hormones also cause changes in the sensitivity and size of the breasts, which often swell.

At the beginning of gestation, a hormone called human chorionic gonadotropin greatly increases in concentration. It’s the one that’s most associated with nausea and vomiting. In fact, its concentration determines the intensity of the symptoms.

This is kind of funny because the hormone increases more in multiple embryo pregnancies than in single-embryo ones. This is why they tend to be more symptomatic.

Another common sign in early pregnancy is an increase in the frequency and need to urinate. It’s also common for a woman to be more tired.

Getting pregnant after sex

Currently, there are different methods to confirm a pregnancy. However, all of them require that some time has gone by after fertilization.

This is because pregnancy tests usually work by detecting whether the concentration of human chorionic gonadotropin in the urine has increased. This hormone increases 6 to 14 days after fertilization.

In some cases, this substance can be determined in the blood instead of the urine. This particular test cannot be done at home, but it’s more accurate.

Therefore, keep in mind is that it’s impossible to determine whether or not pregnancy exists until a certain amount of time has passed since fertilization. Also, pregnancy tests can result in false negatives and false positives. This is why you must always consult a doctor to be sure.

You may be interested in these Seven Tips for Getting Pregnant

As we explained above, fertilization is a complex process that requires optimal conditions. It doesn’t occur at the same moment as the sexual act. In fact, it can occur two to three days after ejaculation.

Furthermore, an embryo won’t always develop and pregnancy won’t always occur even if a zygote forms. For this to occur, it’s essential for the implantation process to properly execute.