Is it Possible to Get Pregnant Naturally at 45?

Many women delay getting pregnant until their last reproductive years. The truth is that a woman's fertility is influenced by many factors, and one of them is age. 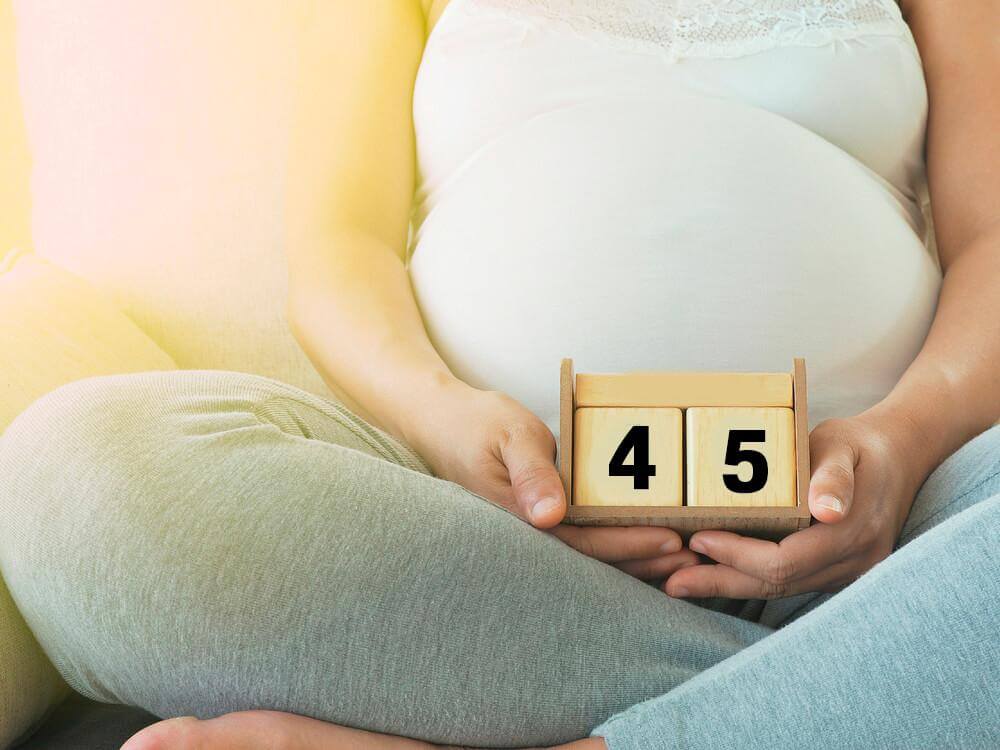 A new phenomenon has ensued in the majority of developed countries: getting pregnant naturally at 45. There are many economic, academic, social and other factors that make women want to delay getting pregnant until their last reproductive years.

There are cases of women who have become pregnant at age 45 or older. However, many don’t know if these pregnancies are natural or not. In this article, we examine the likelihood of getting pregnant at this age naturally.

Fertility Changes with Age. The onset of a woman’s reproductive life begins with ovulation and menstruation. This phase begins in adolescence, around the age of 14, although each female organism develops at a different pace.

But a woman’s reproductive life also has an ending. The slim chances of getting pregnant at age 45 have to do with this. However, to understand the reasons why, you need to know what happens during the menstrual cycle.

Read about: How is breast milk produced?

What Happens During the Menstrual Cycle?

Follicles, or small, liquid-filled balls, are found in the ovaries. The eggs are inside these follicles. However, at the beginning of each menstrual cycle, the brain produces a follicle-stimulating hormone that stimulates follicle growth. When a follicle matures, it releases an egg, and that egg is ready to be fertilized by sperm.

If this happens, the woman becomes pregnant. The cells are implanted in the endometrium, i.e. the uterine lining, and develop to form a baby.

However, if the egg isn’t fertilized, the uterus sheds its lining and is discarded by the body as menstrual flow, restarting the cycle. From the age of 16, the typical length of each menstrual cycle is from 26 to 35 days.

7 years after that, women being their most fertile stage, in which the body is more inclined to get pregnant. This fertile period lasts until the late thirties or early forties.

However, fertility begins to decline gradually after that. Menstrual periods are less frequent due to age-related changes. Why does this happen?

Unlike men, women have a certain number of oocytes or follicles. This is known as ovarian reserve and it’s one of the most important elements in terms of female fertility.

Girls are born with approximately one million oocytes. But when a girl reaches puberty, the reserve decreases to about 400 thousand. Of these oocytes, the woman will only have 300 to 400 available ovulations to become pregnant throughout their reproductive lives.

The best reproductive stage is a woman’s 20s. However, as time passes and the woman ages, her ovarian reserve decreases. This way, the fertile landscape complicates itself, and the chances to become pregnant drop.

In other words, only 5 out of 100 women will conceive and the rest will have to try again. Therefore, the biological chances of getting pregnant at age 45 are very slim. Also, everything becomes more complicated due to the onset of menopause.

Find out: 10 Foods for Improving Fertility

The Odds of Getting Pregnant Naturally at 45

One might think that fertility doesn’t end until a woman reaches menopause. However, the possibility of naturally conceiving ceases many years before, about at the age of 45. Also, this condition decreases the chances of other fertility treatments such as in vitro fertilization.

However, investigators are trying to increase the chances of getting pregnant at an older age through assisted reproductive technology (ART). For example, a study shows that, at the present time, the probability of becoming pregnant at age 40 is 27.6%; at age 41, the percentage decreases about 20%; and at age 43, there’s only a 10% chance of getting pregnant.

It’s important to note that age 43 is the new age limit to conceive through assisted reproductive techniques. However, these treatments will be a lot more expensive for older women. This means that the chances of getting pregnant at age 45 are very low.

As women get older, the chances of getting pregnant decrease, especially after the age of 35. This includes women who want to become pregnant at age 45. For this reason, it’s important for women who plan or waiting to get pregnant to keep this in mind.

It’s also important for them to inform themselves, consider different options, and keep in mind a realistic picture about the chances of success. This will help them make the best family planning decisions.