It's important that women at risk of late-term miscarriage have adequate support so they are able to overcome this loss. Today's article will describe this type of miscarriage and explore its possible causes. 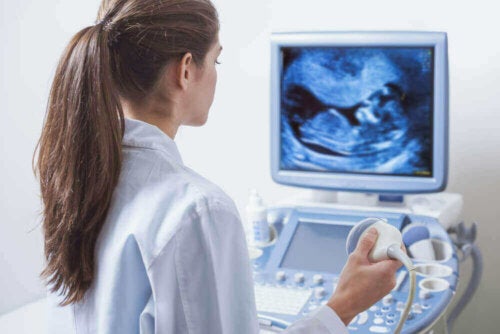 Late-term miscarriage is one of those things pregnant women fear the most. It’s one of the main reasons they consult obstetricians during their first trimester. This is because there are many fears and misconceptions about the termination of a pregnancy.

Many women blame any negative behaviors they might’ve had. However, the reason has nothing to do with their behavior in most cases. We’ll explain a little more about late-term miscarriages below – it’s nothing to feel guilty or ashamed about.

A miscarriage or spontaneous abortion is the termination of a pregnancy, according to IntraMed, an online medical community. This term is commonly used in the first half of pregnancy when the fetus isn’t evolving. That is when the development of the embryo has completely slowed down and is no longer growing. This is a scenario in which a woman would need a late-term miscarriage.

These situations appear without associated symptoms and are more difficult for the parents to understand for this reason. It leads to states of uneasiness and doubts about fertility.

The attending doctor will perform a vaginal ultrasound in the first trimester to determine if a woman requires a late-term miscarriage. It may be necessary to repeat it before making a definitive diagnosis depending on the gestational stage.

The value in the chorionic gonadotropin hormone (a pregnancy hormone) begins to decrease about 10 days after the development of the embryo and stops completely. Thus, a blood or pregnancy test has no diagnostic value.

Symptoms of a late-term miscarriage

This condition is usually asymptomatic so women neither bleed nor have abdominal pain. It’s for this reason that the diagnosis is usually made late and doctors can only notice it after looking at an ultrasound.

You may be interested in: Types of Abortions You Should Know About

The causes of late-term miscarriage lack symptoms that may promote expulsion or the bleeding that takes place to clean the uterus. That is there are no contractions, no dilation of the cervix, and no detachment.

However, what mainly raises doubts is knowing why the embryo stopped developing. You may not know it, but 15% of pregnancies end in miscarriage. Also, 80% of these occur during the first trimester.

The reasons why these types of miscarriages may occur could be:

Read also What Does An Ectopic Pregnancy Involve?

In these situations, it’s necessary to control the complete evacuation of all the contents inside the uterine cavity and examine the extracted tissue.

There are various processes to do so:

We hope that this information about late-term miscarriage helps pregnant women face this challenging situation in the best possible way if they ever have to do so.

Types of Abortions You Should Know
There are different types of abortions that you should know about. In addition, there are laws and deadlines for each one. Keep reading to learn more. Read more »
Link copied!
Interesting Articles
Pregnancy
How to Recognize Postpartum Depression and Treat it