How Does Caffeine Affect the Brain?

How does caffeine affect the brain? It modifies the rhythm of sleep and wakefulness, affects cognitive processes, and even affects our mood. In moderate amounts, it produces great benefits, but its excess can have adverse effects. Learn all about it here! 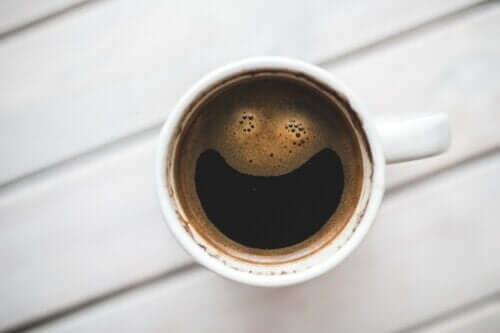 Almost all of us know the basic effects of caffeine on the brain: It produces more attention and revitalizes us. That’s why it’s so common for coffee to be the first drink we have in the morning, as it helps us to wake up for the daily routine. But does caffeine affect the brain in any other way?

The truth is that the action of caffeine on the brain isn’t limited to increasing the state of attention, but goes much further. Experts agree that drinking coffee in moderate quantities is a healthy practice. It’s estimated that up to 80% of adults in the world drink coffee.

However, when we consume coffee in very high volumes, it causes various problems. Likewise, another of the effects of caffeine on the brain is that of generating dependence. This is we experience withdrawal syndrome when we stop drinking it.

Let’s look at the subject in more detail.

How does caffeine affect the brain?


The action of caffeine on the brain is very powerful. From the neurobiological point of view, it modifies the state of consciousness, activating or increasing the level of alertness. It also affects cognitive processes and has psychological effects on mood.

This is because caffeine is capable of modifying the action of neurotransmitters in the brain. Additionally, coffee and caffeine also influence another important number of processes in the organism, such as digestion, metabolism, and vision.

Continue reading: Coffee and Lemon: Is It a Good Mix?

From the moment we wake up, and throughout the day, the body naturally produces a substance called adenosine. This is responsible for the sensation of tiredness and makes us feel sleepy at night. If we drink coffee, this process can be altered.

Caffeine is an antagonist of adenosine, which, simply stated, means that one blocks the action of the other. The result is that we don’t feel sleepy or we don’t feel it in the correct intensity. At the same time, this interaction between caffeine and adenosine leads the pituitary gland to release hormones that stimulate the adrenal glands to produce adrenaline.

By having caffeine in the brain, with adenosine basically blocked and adrenaline production increased, it’s as if we were sending a warning message to the body. This leads to an increased heart rate and more blood pumping, as well as more agitated breathing.

All of this together makes us feel more anxious and irritable. Another additional effect is that caffeine prevents the reabsorption of dopamine, a neurotransmitter that also affects the process of fatigue and rest. Dopamine that’s not reabsorbed increases its concentration, and this is part of the explanation why we become addicted to coffee.

Find out more: The Relationship Between Coffee and Heart Attacks

Caffeine affects the frontal lobes in the brain

The team of Dr. Florian Koppelstaetter, from the Medical University of Innsbruck in Austria, presented a study on the subject. In this study, they state that caffeine activates the frontal lobes of the brain. This area regulates processes such as attention and short-term memory.

Other studies point out that another way that caffeine can affect the brain is by helping to fix memories more easily. However, this effect is only relevant in those who don’t consume coffee too frequently.

Caffeine also increases the capacity to concentrate, especially when we’re feeling fatigued. However, the available information indicates that when consumed in excess, it reduces performance in all areas and generates a state of great nervousness.

Other effects of caffeine on the body

Caffeine also helps some medications to act more quickly and effectively, as is the case with ibuprofen, paracetamol, or aspirin. In fact, there are health conditions because coffee acts as a mild analgesic, particularly in hypotension headaches.

Coffee also makes you feel less appetite, although this sensation is neither long-lasting nor relevant from the point of view of a weight loss plan. Some studies have found that regular coffee drinkers are less likely to die of heart disease, cancer, and diabetes, among others.

Caffeine remains in the body for a long time. Its first effects are felt fifteen minutes after ingesting it and persist up to five or six hours later. That’s the reason why having a coffee in the afternoon can ruin your rest at night!

Coffee Polyphenols and Diabetes
Some studies state that polyphenols in coffee have antidiabetic properties. Discover the association between coffee polyphenols and diabetes. Read more »
Link copied!
Interesting Articles
Healthy habits
Restful Sleep - How Much Do We Really Need?

How much truly restful sleep do we really need? Indeed, the saying "I'll sleep when I'm dead" is popular as…