Causes and Management of Angry Outbursts

Most people fall victim to angry outbursts out frustration at some point in their lives. The difficulty arises when these emotions are disproportionate and get out of control. 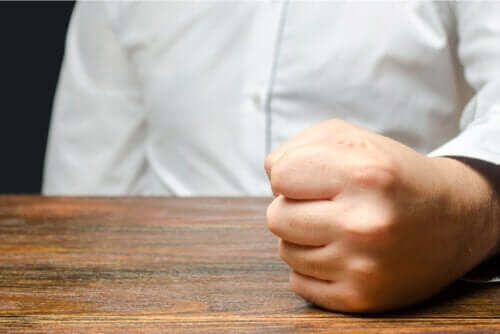 Angry outbursts are the most visible expression of frustration. They can be a real problem for coexisting with others because they cause pain for those who experience them and those close to them.

Everyone can experience anger. It’s an innate universal emotion, one of the six basic emotions, as noted by psychologist Paul Ekman.

The problem arises when people feel anger intensely and the way in which they channel is to lose control. Let’s see what anger attacks are about and some strategies to better manage them.

These are episodes of anger in which people react disproportionately to the rage they experience. The main characteristics are sudden onset, loss of impulse control, and violent expression of emotions.

Additionally, this violence can be verbal (shouting and insults) or physical (hitting or breaking things or people).

Anger attacks are in the Diagnostic and Statistical Manual of Mental Disorders (DSM-V) as an intermittent explosive disorder. The following symptoms must be present to meet the diagnostic criteria:

Did you know that Daily Stress Can Cause Depression?

According to the DSM-V, people who experienced emotional trauma during childhood or adolescence are more at risk for anger attacks.

The intermittent explosive disorder also occurs more frequently among first-degree relatives of people who experience angry outbursts. In fact, twin studies have shown a marked influence of genetics on the onset of the condition.

Let’s not forget that disproportionate expression of anger is present in many mental disorders, such as schizophrenia or depression (Muscatello y Scudellari 2000 cited in Painuly et al 2005). It can also appear in various types of dementia, such as Alzheimer’s disease, certain personality disorders, and in situations related to substance use, such as withdrawal syndrome.

Why are some people explosive?

In addition to the above-mentioned causes, the common denominator of all anger attacks is the person who experiences them perceives the situation as humiliating. They really feel an attack on themselves or their loved ones and thus react disproportionately.

The triggering stressor may be something that offends their ideology, values, actions, employment, family, or even their favorite team. A person who perceives an offense and is going through a rough time is likely to have an angry outburst at any time.

People who manifest an intermittent explosive disorder aren’t condemned to experience them permanently. In fact, psychology offers many tools that can be useful in controlling impulses. Some of the most common are the following:

Find out how to handle Depression After a Breakup

Anger attacks aren’t easy to manage at first. Thus, people feel it’s the only way to express their anger. They explode like a pressure cooker regardless of how hard they try to control themselves.

This causes a lot of frustration in the person and, in most cases, deep regret afterward. This is because no one likes to lose control over themselves.

Don’t hesitate to consult a mental health specialist if you or someone around you can’t control their anger. As we mentioned above, it’s possible to learn to manage anger more efficiently.

How to Improve Your Emotional Health
Having good emotional health helps us face the challenges we encounter every day. How can we manage our emotions better? Keep reading! Read more »
Link copied!
Interesting Articles
Healthy mind
Wu Wei, The Art of Solving Problems Effortlessly