Homemade Cough Syrup to Expel Phlegm from Your Lungs

Onions are a great anti-inflammatory and disinfectant. In addition to including them in your cough remedies, try putting an onion next to your bed at night. Be sure to keep reading to find out how to make homemade cough syrup. 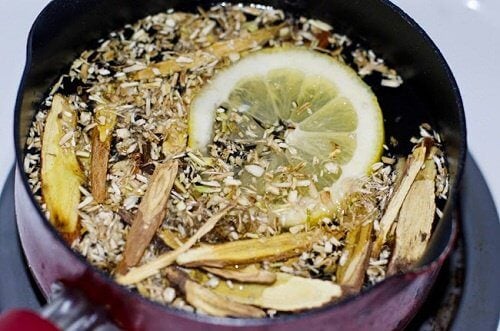 There are different types of cough. For “hacking coughs” (“productive” in medical terms), there are specific symptoms and therefore specific natural remedies for each one. In this article, we’ll look at a homemade cough syrup that helps expel phlegm from your lungs. What’s more, we’ll provide effective recipes and natural remedies.

Productive cough: what you should know

If you feel tightness in your chest and you hear a whistle or wheezing sound while breathing, you have a productive cough. Other symptoms include coughing up phlegm or feeling mucus in your trachea or chest. A productive or wet cough is the result of an accumulation of thick mucus, which can be white, yellow or green. In addition, you expel every kind by coughing.

Your body’s natural response will always be to cough in order to clear out what’s bothering you. In other words, anything that shouldn’t be in your lungs. The symptoms of a productive cough are:

This might interest you: Try These 4 Homemade Remedies to Breathe Better and Strengthen Your Lungs

As we’ve mentioned, there are different colors of phlegm. As such, you need to pay attention to it to know its cause:

Homemade cough syrup to expel phlegm from your lungs

This recipe is a very effective way to remove mucus from your lungs. Furthermore, it’s not contraindicated in young children. You’ll need the following ingredients:

Follow the steps below to prepare this homemade cough syrup:

Pour the water in a saucepan with the sugar and bring to a boil until dissolved. Add the remaining ingredients, mix well and then remove from heat. Let sit for 15 minutes and strain into a glass jar with a tight lid. Drink a tablespoon of this homemade cough syrup three times a day until your condition improves. Store in the fridge so it doesn’t spoil.

Home remedies for a wet cough

As a complement to the above homemade cough syrup, you can take advantage of other natural recipes for expelling phlegm when coughing. We should point out that they’re more effective for when your phlegm is a whitish color.

It is one of the oldest and most effective home remedies to eliminate phlegm. What’s more, you can make the steam with just water or add other ingredients. Some add a handful of coarse salt or certain medicinal herbs that help with respiratory problems, such as mint, eucalyptus, elderberry, thyme, and sage. Bring a pot of water to boil. When it begins to boil, bring your face near it and cover your head with a towel as if making a tent.

Be sure to read: 5 Plant Remedies that Help You Get Rid of Phlegm

Both of these ingredients are strong expectorants, which helps to expel phlegm by coughing. Mix one tablespoon of honey with a pinch of ground black pepper, and take twice daily.

This vegetable offers many health benefits. For example, it has disinfectant and anti-inflammatory properties, particularly for the respiratory tract. To treat a wet cough, you can take advantage of its benefits in different ways. One is very simple: cut it in half and smell the aroma directly. Another alternative is to make a tea with an onion and four cups of boiled water (drinking three cups a day of the strained liquid and sweetened with honey, lemon, and ginger).

This is another ally for those with respiratory problems. This is because garlic has many valuable properties that make it a natural antibiotic. You can cut a clove and eat it raw, either alone or in salads. Some choose to make tea by putting it in boiling water, the same way as the onion recipe above.

You’ll need a small slice of ginger and a glass of very hot milk. The first of the two ingredients has expectorant properties and if we add the warm milk, it can eliminate the phlegm that bothers you so much. It’s a wonderful remedy to take at bedtime. Mix both ingredients and drink it before it gets cold. It will help you fall asleep and breathe better.

7 Natural Ways to Boost Your Immune System and Prevent Colds and the Flu
A way to boost your immune system and fight cold and flu symptoms is to use medicinal plants. Read the article for a short list of the best options. Read more »
Link copied!
Interesting Articles
Taking care of your body
Is Creatine Safe for the Kidneys?