How to Heal Bruises Fast

In this article, you'll discover the best home remedies to heal bruises. 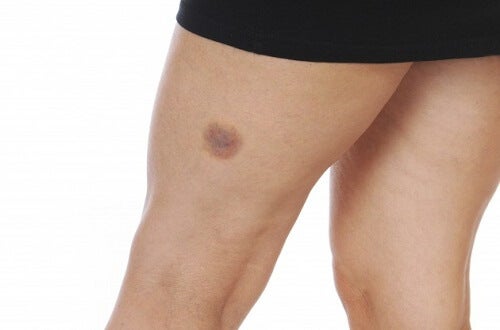 A bruise, contusion, or hematoma is the result of an impact to the skin that produces a blood clot underneath. When the small blood vessels beneath the skin are damaged, it can be very painful. Bruises can even develop in the muscle tissues or even at bone level. Keep reading to find out what the best home remedies to heal bruises are!

Bruises can take a few weeks to disappear completely. In addition, certain people are more vulnerable to them than others. During the process of healing, bruises change color. They look reddish at first, then turning purple or bluish before becoming green and yellow. After that, they tend to disappear.

The level of bruising can vary depending on a person’s age or the sensitivity of their skin. The elderly and people with very fair skin usually bruise more often. This is because their blood vessels are more fragile or their skin is more sensitive to bumps and scrapes.

Symptoms of a typical bruise are pain in the area (especially when touched or brushed) and swelling. They aren’t serious if they’re small or if they become less bothersome over time. If there are serious symptoms like nausea or dizziness, consult a doctor immediately. You should also treat head trauma or impacts right away.

A bruise appears when we hit something hard, like when we fall down while walking or bump into furniture. But as we said before, the intensity needed to discolor the skin varies according to age and how fragile the skin is. Later in life, bruises can even appear without injury. This also occurs in athletes who lift weights due to their use of intense muscular force.

Taking medications that thin the blood (like aspirin, ibuprofen, arthritis medications, or anti-inflammatory agents) can interfere with the natural blood clotting process. This can cause more severe bruising than normal. Others who get bruises more often than most may have hemophilia or cirrhosis.

Women may be more susceptible to bruises than men if they wear less protective clothing, use waxing methods for hair removal, or participate in active sports.

We hope you’ve found this article on how to heal bruises useful and informative!

10 Natural Remedies for Treating Bruises
We all know how painful and annoying bruies can be. So, here are 10 natural remedies for treating bruises that are simple, effective and safe. Read more »
Link copied!
Interesting Articles
Taking care of your body
Is Creatine Safe for the Kidneys?