Foods that People with Cirrhosis Should Eat

Cirrhosis is an incurable disease. Therefore, knowing what diet to follow and what aspects to consider is essential. Learn more by reading this article! 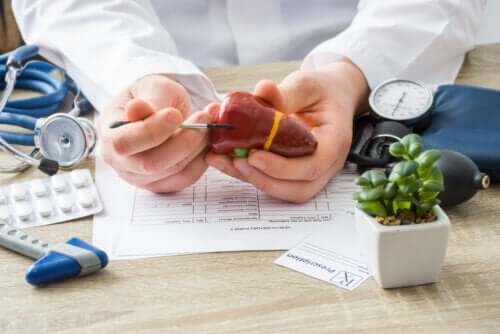 The foods that people with cirrhosis should eat depend on the stage of the disease they’re going through. Taking into consideration that it has no cure, setting long-term goals is a priority, since they must be sustained for years.

This pathology is the end result of chronic liver damage. According to the American College of Gastroenterology, about 5.5 million people in the United States suffer from it. Believe it or not, this condition causes around 26,000 deaths a year approximately.

Cirrhosis, what exactly is it?

Cirrhosis is a chronic condition in which cells die in certain areas of the liver, resulting in fibrosis (a kind of scar). Thus, nodules replace liver tissue, which leads to an alteration in the architecture and functionality of the organ.

According to several pieces of research, one of the main causes of this pathology is the excessive consumption of alcohol. Secondly, we have a biliary obstruction, chronic hepatitis B or C, and other liver diseases. It’s very important to learn its different causes, for example, alcoholics wouldn’t get the same diet as other patients.

The stages of the disease

There are two basic stages in regard to this condition. The initial one is known as compensated cirrhosis. Then, without any treatment or approach, advanced or decompensated cirrhosis occurs, which is when cell destruction is maintained over time. The diet must be extremely rigorous in the latter stage since it’s where the following symptoms arise:

Malnutrition is a very common sign in these patients. Several studies suggest that up to 25% of compensated cirrhotics and 80% of advanced patients suffer from it. In general, there’s a loss of muscle mass (greater in men) and of adipose tissue.

In alcoholics, malnutrition is even greater. On one hand, we have the deleterious effects of liver disease. However, we must add the lack of variety in the foods consumed due to the bad habits of addiction.

Foods that people with cirrhosis should eat

In general, patients get their cirrhosis diagnosis when the disease is already advanced. For this reason, the main dietary goal is to provide the nutrients they need to avoid deficiencies. Additionally, people who have this disease should follow a hepaprotective diet at all times.

Thus, the piece of study Nutritional Care for Patients with Liver Cirrhosis shows that those who have compensated cirrhosis and are stable tend to have quite normal requirements. Therefore, the diet must provide all food groups and be low in fat.

According to the Spanish Society of Digestive Pathology, the following must be included in it:

In the same way, each particular case must undergo a thorough evaluation. Research in this field indicates that, in order to avoid deficiencies, the protein intake should cover from 1 to 1.5 grams per kilogram (2 lb) of weight. Likewise, specialists suggest having 5 lightweight meals a day.

In addition, all toxic substances (including alcohol, of course) must be completely eliminated from the diet. In fact, when alcohol abuse is the cause of this pathology, its elimination slows the progression and improves the prognosis in a remarkable way.

Read also: The effects of alcohol in the body

Eating when there are express symptoms of the disease

The aforementioned complications appear in the decompensated phase. In it, the foods that people with cirrhosis should eat are reduced. Therefore, according to an article published in the Farmacia Profesional magazine, the diet must be catered to their needs. It’s important to consider the following:

Protein restriction can be from 0.5 grams per kilogram of weight in patients with encephalopathy. Then, they can gradually increase the value until reaching a normal level. If the patient decides to take this measure, no matter how minimal it may be, it’s necessary for them to consume supplements with branched-chain amino acids to avoid further damage.

Also, the introduction of vitamin complexes can be considered – vitamins B and K are especially necessary. The first prevents the evolution of neuropathies and the second reduces bleeding episodes that result from coagulation failure.

Patients with advanced disease may consider liver transplantation as a treatment option. However, it’s important to remember that the surgery carries great risks and that it’s not really the definitive solution considering how intense the aftercare is.

Likewise, those who get to this stage need to take medications to keep their body from rejecting the new organ. Nonetheless, these drugs have adverse effects, many of them hepatic.

Food that people with cirrhosis should eat, things to remember

No matter if the cirrhosis is stable or unstable, the liver’s activity is always deficient, which causes toxic substances to accumulate in the body. Therefore, in order to avoid any kind of complications, it’s vital to be strict with the diet at all times

The ideal thing would be to keep controls with a medical and nutrition professional to evaluate the general condition and indicate the most appropriate diet for the individual. Likewise, the use of drugs will be necessary since the complexity of the disorder doesn’t admit a single approach.

What Is Fatty Liver Disease? How Is It Treated?
Fatty liver disease affects as many as 1 out of 4 people. But what is it and how is it treated? Read this article to find out. Read more »
Link copied!
Interesting Articles
Illnesses
Hepatitis in Children: What You Need to Know