The Effects of Alcohol in the Body

Ethanol is a psychoactive drug that causes a lot of side effects, which seriously alters the body. 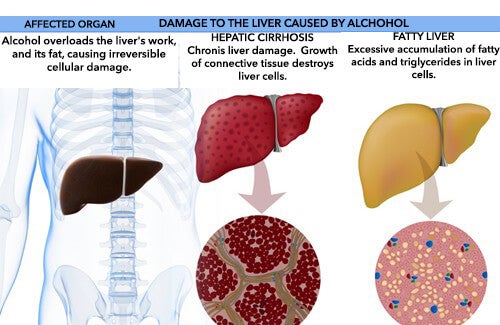 Alcohol produces innumerable harmful effects in the body. In this case, the amount of alcohol you drink plays a very important role, as well as the circumstances.

How does alcohol act in the body?

Alcohol can have a double effect on the body. At first it produces a great sense of satisfaction and happiness, but then it begins to cause blurry vision and serious coordination problems.

The cellular membranes cannot stop the alcohol from moving in. Once in the blood, it irrigates through the majority of tissues that comprise the body.

With excessive consumption, you can easily lose your consciousness. But extremely high consumption can cause alcohol poisoning and even death.

A high alcohol blood content causes cardiorespiratory arrest; or it can cause death by asphyxiation in your own vomit. When someone is completely “gone” due to alcohol consumption, they can drown in their own vomit by not being able to respond to this need.

After consumption, alcohol can take up to 30 or 90 minutes to reach the blood. Once that happens, your blood sugar drops, causing complete weakness and exhaustion. This is because alcohol accelerates the transformation of glycogen into glucose, which your body quickly eliminates.

The phases of alcohol intoxication

Effects appear immediately after drinking. They depend on how much alcohol you ingested.

The effects of alcohol consumption on the body

A lot of alcohol’s effects on the body take place over short and long-term basis. They also affect a lot of organs.

The effects of alcohol in the brain and nervous system

Can Anemia Affect Your Emotions?

In the heart and respiratory system

In the digestive tract: stomach, pancreas, liver, and esophagus

All of this gastric discomfort is due to the fact that ethanol erodes and irritates the gastric mucosa, causing stomach burning. The effect can be much worse if you drink different types of liquor at the same time.

What Should I Eat if I have Fatty Liver?

The effects of alcohol in the blood

The effects of alcohol in the immune and reproductive systems

In pregnancy and the fetus

This is one of the most severe problems brought by drinking without limits, or uncontrollably. There are large amounts of symptoms and diseases associated with alcoholism.

We hope that this illustration of all the serious problems that alcohol can create is a true help to become aware of the dangers. We also hope it pushes you to get professional help.

Alcoholism is more than just a “vice”, as some people call it. It’s a serious health problem that should receive immediate attention as soon as you begin to feel the desire to drink frequently.

If you have a friend, family member, or someone you know, that has this problem, try to help them quit. Help them find a rehabilitation center for alcoholics.

We can assure you that later on, they will thank you. You’ll save them from numerous problems, both with family and personally. And most importantly, they’ll avoid the serious health consequences that can frequently be fatal.

How to Know if You’re Addicted to Alcoholic Beverages
Drinking alcoholic beverages has been popular for centuries, and addiction to them isn't something rare. Over time, these drinks have become more popular. Read more »
Link copied! Next
Interesting Articles
Did you know?
Why Do We Have Armpit Hair?