Can Anemia Affect Your Emotions?

In addition to taking away your energy to do your usual activities, anemia can also rob you of the desire to interact with people and make you more listless. 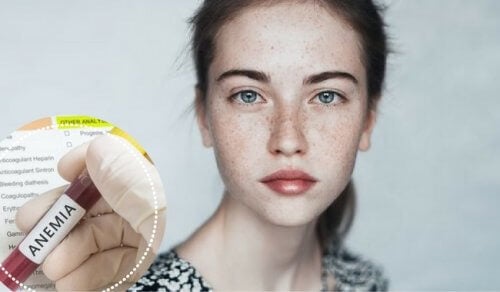 When you’re sick, your symptoms can affect your mood and how you interact with the people around you. Today, we’d like to take a look at the relationship between anemia and emotions.

What’s anemia and how does it manifest?

Anemia is a low concentration of hemoglobin in the blood. In other words, it’s a condition that stems from a lack of iron in your body. Thus, it isn’t a disease but a deficiency.

Although some signs can make you suspect it, a blood test is required to detect it. Laboratory analyses can also show other changes in your blood flow, such as lower amounts of red blood cells or reduced hematocrit levels.

Iron-deficiency anemia can be caused by gastrointestinal pathologies or excessive blood loss.

Why does it affect you energy?

Iron is a key element of hemoglobin. When you don’t have enough iron in your blood, your blood cells carry less oxygen to all tissues and organs in your body, leading to weakness and decay.

People who suffer from this condition are often unable do an activity without working themselves up to it. They sometimes even lack the strength to carry out daily tasks. This lack of energy can make you suspect a possible iron deficiency.

Check out another article: Things to Keep in Mind to Increase Your Energy Every Day

Other perceptible signs of anemia are:

According to the Medline Plus experts, “Most of the time, symptoms are mild at first and appear slowly”. Symptoms can include:

The relationship between anemia and emotions

When you have anemia, you don’t feel like doing anything. For this reason, everything is difficult for you, from making breakfast to working, exercising, or taking out the garbage. It even seems that you have a hard time staying motivated in general.

Fatigue, discouragement, and lack of motivation can make you easily overwhelmed and experience various negative emotions, thus reducing your well-being. Therefore, we can say that anemia has both physical and psychological consequences.

It’s interesting to know that, according to a study published in 2013, both emotions and feelings can influence the appearance of anemia. This approach takes into account Ayurvedic medicine, which states that health is a combination of mind, body, and spirit, and not just the physical.

The approach of the study as such is that emotions and feelings can influence metabolic processes, increasing or decreasing different digestive enzymes. This is because iron absorption requires a high level of gastric secretion.

Discover: Diet for Depression: Foods that Cheer you Up

Although anemia can affect your performance and make it more difficult for you to do your day-to-day activities, it’s possible to reverse it with the treatment prescribed by your doctor and good lifestyle habits.

As you progress with the treatment, you’ll see how, little by little, you’ll begin to regain strength and that several activities become easier for you.

Of course, if psychological concerns persist over time even though you improve physically, it’s best to seek professional help.