Epilepsy and Pregnancy: Everything You Should Know

Having epilepsy and being pregnant does carry risks. Therefore, it's extremely important that women with this disease learn about the ways to reduce the risk of associated problems. 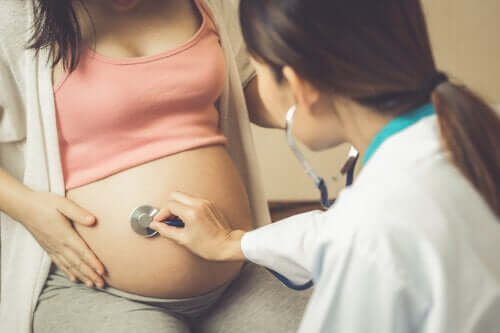 Believe it or not, many women have to deal with epilepsy and pregnancy at the same time. In fact, this situation happens in 3 out of every 1,000 cases. It’s not the most common situation there is. However, as you can see, it’s more common than you might think.

Fortunately, pregnancy doesn’t really increase the risk of epileptic seizures. Also, most babies born to mothers with the condition end up being completely healthy. Actually, up to 96% of women who experience this mixture can have a normal delivery without any type of complications.

What happens in the pregnancy of a woman with epilepsy?

Epilepsy refers to a neurological disease in which the person suffers massive synchronous discharges from their neurons. In other words, there’s electrical activity of nerve cells in large areas of the brain all at the same time.

This may or may not give rise to seizures. Now, we must make clear that there’s a difference between epileptic seizures and a seizure state. Contrary to popular belief, they don’t always go hand-in-hand. Whatever the case may be, electric shocks always give place to a symptom which, in many cases, is a small localized movement.

When going through a pregnancy, there are changes in the female body due to the action of hormones, especially progesterone. In general, there are modifications in the genital, reproductive, cardiac, and soft tissues. We could say that, in one way or another, almost all cells are affected.

That said, there isn’t data that states whether seizures tend to increase or decrease during pregnancy. Epidemiological studies in this regard conclude that the fetus doesn’t really influence it.

In fact, research shows that one of the biggest causes of problems during pregnancy is the lack of adequate sleep. This does make a change in the relationship between epilepsy and pregnancy. This is because, in general, seizures do increase if the woman doesn’t sleep well during the last trimester. However, no one knows for sure if this is actually due to poor rest and stress or due to hormonal changes.

Nonetheless, there are problems with the medications used to treat epilepsy. For a person to make their epilepsy manageable, they need to take drugs. However, doing this during pregnancy isn’t the healthiest idea, since pregnancy itself modifies the total volume of circulating blood, as well as its distribution in the body tissues.

Epilepsy and pregnancy: the administration of antiepileptic drugs

One of the main side effects of anticonvulsant drugs is congenital malformations. This represents a dilemma when it comes to caring for and monitoring the pregnancy of an epileptic woman.

Researchers have compared the incidence of birth defects among children born to epileptic mothers with others born to women without the disease. It’s safe to say they found notable differences. Truthfully, in the general population birth defects occur every 100 deliveries. However, in those medicated with antiepileptic drugs, there’s up to three times the risk of birth defects.

The probability of a complicated birth increases when the mother takes several prescription drugs. This is a frequent situation among epileptic patients who don’t respond well to the usual treatments. As a result, the doctor begins to combine different doses to reduce the seizures.

Furthermore, research has shown that there’s a higher chance for the fetus to have defects if the woman takes drugs such as valproate and carbamazepine. In this case, the most affected area of the fetus is the central nervous system.

What doctors usually suggest is to lower the dosage of antiepileptic drugs during pregnancy. If the woman has been seizure-free for more than 9 months, they can take very small amounts of one drug.

In any case, it’s necessary for a medical professional or specialist to approve this reduction. Neither the patient, nor their relatives, nor anyone without the necessary faculty can make this decision. Otherwise, this can bring serious consequences to both the mother and fetus.

Read also: How to manage epilepsy and breastfeeding

Is there a risk of seizures during pregnancy?

While statistics don’t clearly report an increase or decrease in seizures during pregnancy, the truth is that they do happen. If the patient tends to have frequent seizures, odds are she’ll continue to have them during pregnancy.

Seizure states carry risks for both the mother and the fetus. One of the biggest problems is hypoxia (the lack of oxygenation of the tissues while the event occurs). If not enough gas reaches the placenta, the functioning and development of the baby’s organs can be affected.

Also, trauma can come as a complication of seizures. Of course, this can be very problematic in a pregnant woman. By losing consciousness during the episode, the patient may fall and injure herself in sensitive areas, such as the skull and abdomen, now enlarged by the uterus.

The mortality rate in epileptic pregnant women is higher than in the rest of pregnant women. Many of these deaths, which are estimated to be about 1 in 1,000 pregnancies, come from sudden unexpected death in epilepsy (SUDEP).

SUDEP refers to unexplained death in people with epilepsy. By unexplained, we mean that there’s no drowning or trauma whatsoever. No one knows about the origin of this syndrome. However, we do know that there are risk factors that one can act upon to reduce the possibility of its appearance.

Basically, pregnant epileptic women should never sleep alone or face down. Also, their families or friends should learn about first aid in case they need to assist her.

Read also: Taking antibiotics during pregnancy may be risky

What you need to remember about pregnancy and epilepsy

As you can see, epilepsy and pregnancy is a complicated combination. Things can go well in the end. However, the treating physician must monitor the case at all times. On top of that, the woman should take all precautions to reduce the associated risks.

Additionally, remember that the woman can only continue with medication if the professional says so. The doctor may ask for the dosages of the concentration of the drugs in the woman’s blood to adjust the amounts. No pregnant woman should ever decide on her own to suspend or modify the dose of her medication.

The delivery should be scheduled in advance, in specialized places, with a medical team experienced in the field. The option of a cesarean section is possible and the decision should be made following a sincere dialogue between the obstetrician and the soon-to-be mother.

The greater the communication between them, the healthier and easier the pregnancy will be.

How to Manage Epilepsy and Breastfeeding
Generally, breastfeeding and epilepsy are recommended for all newborns of mothers with this condition. These drugs have no side effects in a baby. Read more »
Link copied!
Interesting Articles
Pregnancy
Risks of a High Sugar Diet During Pregnancy