Before releasing your anger on your children, remember that they're not to blame for your problems. Try to avoid causing them unnecessary suffering and focus on raising healthy kids by protecting their happiness and self-esteem. 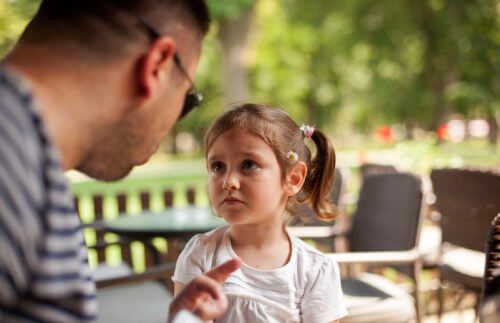 If you want to raise healthy kids, remember that your children don’t deserve to be the target of all your stress, anxiety, fear, or negative experiences you have in your daily life. It’s easy to shout at them, get angry, or even punish them for no reason.

You might not recognize, however, that they’re not to blame for how things have gone in your life or how frustrated you are by a situation between you and your partner. No one is to blame for everything that happens to you, particularly not your kids.

The Risks of Taking Your Anger Out on Your Kids

Sometimes, venting your frustrations on your children can be a way to release those pent-up emotions and unspoken words.

Perhaps it’s because you want to stay composed in front of your boss for fear of losing a job. Maybe it’s because you’ve accepted certain behaviors in your partner that you secretly dislike. All of this can cause you to explode with anger around those who least deserve it.

Moreover, you choose someone who can’t defend themselves and who you have power over. If they do argue back, you’ll use the authority that you have over your children when, in reality, you don’t recognize that you’re starting to lose control of the situation.

You don’t have to always hold in negative emotions. They should, however, be directed towards the right person. Try to find the right words, be respectful, and stay focused on the particular context, but don’t bottle up what you know will end up coming out eventually.

By the same token, don’t keep putting up with or staying quiet about bothersome things your partner is doing. If you vent these frustrations, you risk sabotaging your opportunity to raise healthy kids.

Maybe you do it because you hope they’ll change the way they behave, but if you don’t say something, how will they ever know? It isn’t a guessing game…

Children Suffer the Consequences of your Frustrations

Venting fears, anger, and frustration can have a strong impact on innocent children who are just starting this game of life.

The less you’re able to resolve your problems, the most negative things you focus on them. Then, they won’t understand why the slightest mistake became a huge drama.

If this situation continues over time as you fail to stop and recognize that your behavior isn’t resolving the true origin of the problem, your children will start to have low self-esteem.

Good self-esteem is critical, but if you see everything in your life as being dark, that’s all you’ll see in them.

Next thing you know, you’ll be promoting negative reinforcement, causing them to see and feel that everything they do is wrong. Additionally, as for the things that they do well? You’ve forgotten them.

Although they’re young now, when they grow up they could have serious problems – not just feeling like they have low self-worth, and are incapable of following their dreams. They’ll also suffer in their personal relationships.

You might think that the fault lies with the boss who doesn’t treat you the way you deserve or your partner who isn’t considerate enough. However, it’s time to look at all of this from another angle.

The fault doesn’t lie with others, but rather yourself. You are the one who is responding to the things that happen to you in the most inappropriate way possible.

By not expressing yourself, staying silent, and assuming others will change their behavior, you’re allowing the situations to continue just the way they are.

Leave your fears and insecurities aside and be free to express yourself. Start making decisions and stop acting in a way that’s different from what you think.

When you’re at peace with yourself, you won’t need anyone to become your daily punching bag to vent your frustrations.

Your children are not to blame for the actions of others. You have to start by releasing your fears and expectations before they reach them.

Focus on the present moment and take action when you need to. Don’t hold in your anger and frustration: release them, and you’ll feel free to raise healthy kids.

How to Encourage Kids to Love to Read
A love of reading is a habit you have to encourage from a young age. So today, we want to show you some ways to encourage kids to love reading, even before they know how to speak. Read more »
Link copied!
Interesting Articles
Children
8 Crafts to Decorate a Children's Party