When you accept criticism assertively and don't get defensive, you won't feel offended and you'll also get a better psychological balance. 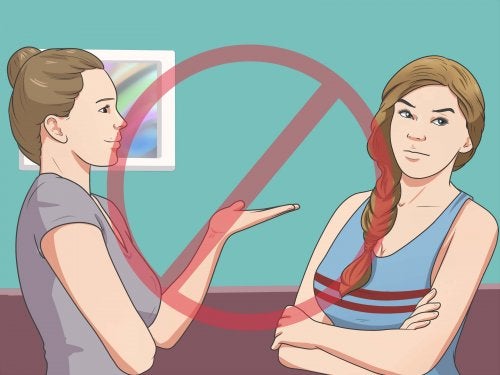 “You didn’t do a good job today” “If I were you I wouldn’t have made that decision”… All day long, we’re subject to criticism. Is it difficult for you to defend yourself from criticism?

Assertiveness is not well developed in a lot of people. However, it’s what allows us to defend ourselves and know how to respond with respect.

Take a look at this article too: Learn to Be Assertive and Say Enough!

When someone criticizes our, our first reaction is to get defensive. We take it as an attack. It hurts us and feels offensive. That’s why we react like this.

However, when we get defensive, we want to counterattack. We throw the criticism back in their face and try to give them a taste of their own medicine.

If you want to learn how to defend yourself assertively from criticism, that’s not the road you want to go down. Counterattacking actually just brings us down to their level.

So when you feel the impulse to defend yourself from their criticism, stop, breathe, and ask a question.

The question is something that the person doing the criticizing won’t be expecting.

For example, if someone says, “Wow, what are you wearing today?” instead of trying to justify yourself, showing your insecurity, or attacking back, it’s better to ask: “What does it matter what I’m wearing?”

They probably won’t know what to say. Or, if they do answer, it won’t make any sense.

The important thing is to not let their criticism make you mad, let alone feel bad about yourself.

If someone criticizes something you’ve done not to make you feel bad but rather because they’re right, it’s not a good idea to get defensive.

If a friend criticizes you for taking so long to get ready and meet him, it’s not good to say, “Remember that time I had to wait for you?”

Reacting to criticism like this doesn’t strengthen relationships. It undermines them, little by little, until they finally break.

The ideal response would be an assertive one, saying something like, “You’re right, I took a long time.”

Admit that you don’t know or that you were wrong. However, never let anyone stomp all over you or make you feel like you need to change.

If you don’t know anything about politics because you really aren’t interested in it, there’s no reason to break your back learning it just because someone said something that made you feel bad.

Accept it as a part of who you are and express your position without shame.

Now, there’s something very important we can’t leave out. You can defend yourself assertively as long as you respect other people’s opinions. But above all, respect yourself.

If someone tells you your outfit is ridiculous, there’s no reason to get offended or reject that opinion. Respect it, accept it, and say, “Yeah? Well, I love it.”

We can’t all have the same tastes  and there’s no reason for you to change yours.

You can respect that the other person was honest and gave you their perspective. However, remember that your opinion is what matters the most.

It doesn’t matter if people like how you dress. If you like it, that’s what matters. If you think like that, you’ll learn how to be more flexible with other people’s opinions and tastes.

Do you know how to defend yourself from criticism and be assertive? How do you usually react when someone criticizes you?

An Argument and the Art of Keeping Your Cool During It
To keep an argument from bringing out the worst in you, you have to know yourself well and learn to control your emotions. Read more »

Link copied! Next
Interesting Articles
Healthy mind
What Are the Symptoms of Alexithymia?

Have you heard of microfoam varicose vein treatment? Varicose veins are as much of a health problem as they are…

Taking care of your hair
5 Treatments for Naturally Dry Hair

If your hair is frizzy, dull and has split ends you may need to treat naturally dry hair. Most conditioners…

Illnesses
The Symptoms and Treatment of Pyelonephritis