Discover if Bread Is Fattening

Many people wonder if bread is fattening or not. Well, in this article, we decided to resolve this question and explain a little more about the mechanism of satiety. 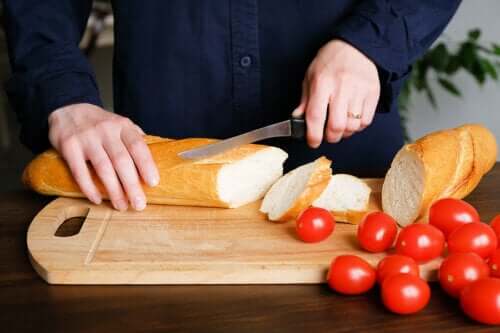 A question that often pops up is whether bread is fattening or not. It’s worth mentioning that there are no fattening or slimming foods. The important thing is to maintain a caloric balance.

However, the influence of each food on insulin secretion and satiety may lead to overeating and make you gain weight.

Bread is a food that mostly consists of carbohydrates. Its energy content is approximately 300-400 kcal per 100 g. You can include it in a balanced diet. On its own, it doesn’t cause weight gain.

However, it usually has a high glycemic index, especially varieties made with refined wheat. This results in an insulin peak with subsequent reactive hypoglycemia.

The consequence of consuming bread in isolation is momentary satiety with a subsequent increased appetite. Therefore, we’re talking about food that isn’t satiating. As such, it may encourage an excessive intake of foods.

Discover: Why You Should Avoid Commercial Bread

You shouldn’t eat it as a side dish

You can eat bread in moderation, but always as the main element of a dish. Thus, you can eat it, for example, in pastries and pizza. But it’s always a bad idea to add it as a side or accompaniment.

On the other hand, many people soak bread in dipping sauces. This increases the calorific value significantly. In addition, its palatability can lead people to eat more than necessary, overcoming the appetite barrier.

Similarly, it’s a product that most people don’t account for when they assess their diet. Many people consume it at main meals but aren’t aware that it’s a caloric element and do it almost out of habit.

Not all breads are equal

There are different types of bread, according to their ingredients and manufacturing process. Thus, wheat bread isn’t the same as rye bread, sliced bread, nor homemade bread.

When it comes to eating bread, it’s always a good idea to choose whole-grain varieties. The less refined, the better. In addition, those made using traditional methods that include various types of cereals or grains have a significantly higher nutritional quality.

This article may also interest you: How to Make Homemade Rye and Spelt Bread

The satiating power of foods

When you’re planning a diet, in addition to taking into account the caloric value of food, it’s important to assess their satiating power. Thus, it’s preferable to avoid processed foods or foods rich in sugar.

Proteins and fats are more satiating and stimulate leptin and neuropeptide. Thus, subsequent reactive hypoglycemia is avoided after the intake of simple sugar, which leads to increased appetite.

Foods rich in fiber produce stomach and intestinal distension, stimulating the receptors responsible for transmitting the feeling of fullness. This is one of the reasons why you should prioritize the consumption of non-processed foods.

Thus, in addition to offering advantages in terms of macro and micronutrients, it can efficiently control the glucose curve and the mechanism of appetite.

When it comes to choosing foods rich in carbohydrates, you should prioritize whole grain carbs. They contain a lot of fiber and have a low glycemic index, which stimulates insulin production a lot less than refined sugar does.

Conclusion on whether bread is fattening

There’s no fattening food per se, and bread is no exception. However, people tend to consume bread erroneously because they often use it as an accompaniment to food.

If you include it in your diet, you must make sure it’s the main element of your dish. Also, you should avoid consuming it as a snack to avoid subsequent appetite increase.

As a general rule, it’s a good idea to avoid carbohydrate-rich foods with a high glycemic index, and processed foods. Fiber consumption is essential to the satiety mechanism and to prevent the development of complex diseases.