A Natural Alcohol Based Remedy Against Nail Fungus

Nail fungus affects both fingernails and toenails but it's more common in the latter due to the use of certain types of footwear and conditions that enable its proliferation. 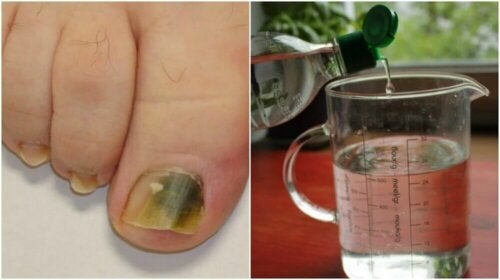 Proceed with caution and consult your doctor about the best course of action before trying this remedy against nail fungus. Otherwise, it may worsen the problem and make it harder to get rid of.

A doctor should be able to provide the safest and most effective treatment for every case. However, it’s common to hear that people resort to various household ingredients, such as white vinegar.

This natural preparation based on alcohol is supposed to have antifungal properties and some people are convinced it can help get rid of the pathogens that cause this fungal infection.

Nail fungus, a condition known as onychomycosis, is caused by the attack of dermatophytes, yeast, or non-dermatophyte mold that spreads rapidly in humid and warm environments.

Although the condition doesn’t show any symptoms in the beginning. However, little by little it’s possible to notice that the nail looks thicker with a yellowish hue and that the surrounding skin looks inflamed. It’s also important to fight the fungus to avoid losing the nail completely.

This remedy is a product for external use with antiseptic and antifungal properties that helps to destroy the microorganisms that cause infections.

To boost this natural treatment, we are going to use 90% ethyl alcohol, the one that’s usually in all first aid kits. It stands out because of its disinfectant and antibacterial effects which prevent the development of infections when applied to wounds.

It’s quite effective against a wide variety of bacteria and fungi, although it doesn’t attack bacterial spores.

Furthermore, it’s used as a complement to treatment against onychomycosis. However, you need to combine it with other ingredients to enhance its attack.

Hydrogen peroxide is a natural product that’s used for the disinfection of superficial wounds.

Its antibacterial and antifungal properties are effective in combating fungus on the nails and feet, so it’s often used in nail treatments.

Hydrogen peroxide also helps to diminish the yellowish coloration caused by fungus. Plus, as if that wasn’t enough, it prevents weakening and breaking of the nail.

Its antiseptic and anti-fungal properties help to fight fungus and prevent the deterioration of the nail.

Remedy to help get rid of nail fungus

To combat nail fungus that’s damaging your nails, combine all the above ingredients in the same single treatment. It’s easy to make, and you can use it regularly until you get rid of it.

Getting rid of nail fungus is often difficult, so consulting a specialist is always the best option. In any case, run this home remedy by your doctor and proceed to use it if they approve of it.

A Natural Turmeric Remedy Against Nail Fungus
Thanks to the medicinal properties of this natural turmeric remedy, you can fight off nail fungus efficiently and also make them stronger. Read more »
Link copied!
Interesting Articles
Taking care of your body
The Causes of Ingrown Hair and its Removal