A Sensational Cinnamon and Lemon Remedy to Try

These honey and lemon remedies can be enjoyed both hot and cold, and can even be combined with other ingredients, such as pineapple. 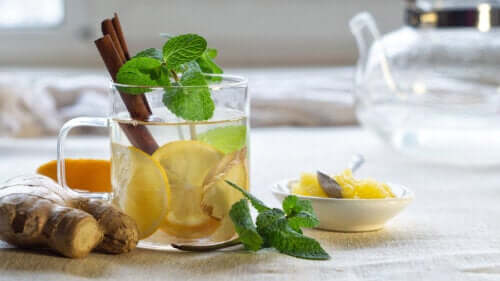 There’s a remedy that, over the years, has had various purposes. It’s just a simple mixture of cinnamon and lemon. Have you ever tried it? Do you know its benefits? Don’t worry, we’ll reveal them to you later.

Nowadays, combining cinnamon and lemon is very common, because it allows the elaboration of a delicious homemade refreshment for the hottest months of the year. Although it’s true that it can also be enjoyed hot, as an infusion.

And why have these two ingredients been chosen in particular? Let’s see below in more detail, as well as other interesting facts.

Cinnamon and lemon, a common mixture

According to data from the 5 al día Association, “lemon provides a large amount of vitamin C, and smaller amounts of other vitamins and minerals”. Among the latter, potassium stands out, which is essential to balance your body.

Because of its citric acid content, it’s often been considered to contribute to weight loss. However, there’s no scientific evidence to confirm this.

For its part, the Spanish Nutrition Foundation (FEN) states that “cinnamon is attributed with carminative properties against colic, gas and other stomach problems. Its antimicrobial action has also been proven, for its high phenol content”.

Additionally, the consumption of cinnamon has been connected to a reduction of sugar, cholesterol and triglyceride levels. Therefore, it’s currently considered a spice with medicinal potential for various issues.

In the popular sphere it’s believed that, together, cinnamon and lemon can provide some benefits to the body. To take advantage of them, it’s said they should be consumed regularly, within moderation and alongside a healthy lifestyle.

Ways to mix cinnamon and lemon

With a bit of cinnamon and lemon, you can prepare a delicious refreshment for the hottest months of the year. Here is the recipe!

2. Lose weight with cinnamon and lemon

As well as helping to keep you hydrated, this drink could also help you lose weight. How? Simple. By giving you a healthy homemade substitute for soda and sugary drinks, which you can easily prepare at home in minutes.

However, it’s very important to avoid adding sugar and other sweeteners, to make sure you don’t go over your daily sugar allowance, as recommended by the World Health Organization.

This drink won’t help you to lose weight in itself, so it’s important to make it part of a healthy, active lifestyle.

Keep in mind that we wouldn’t recommend drinking more than one or two cups a day, as cinnamon can have some side effects. To make this drink, you’ll need:

3. Cinnamon and lemon for healthy skin

Although it’s not scientifically proven, according to popular belief, this drink could be beneficial for your skin.

Many believe that because cinnamon has antibacterial properties, it could be useful for treating acne. However, further research is still needed.

4. A drink against colds

While consuming food and drink that contains vitamin C doesn’t guarantee total protection and against cold-causing bacteria, it can be beneficial for your general health.

If you’ve got a bad cold, this comforting drink should help keep you hydrated.

As you can see, these remedies are really easy to prepare at home and can serve as a great complement to your healthy lifestyle.

If you’re ever worried or in any doubt about your health, be sure to consult with your doctor. They’ll be able to prescribe the best course of treatment for your individual case and make sure your body gets what it needs.

9 Delicious Homemade Lemonade Recipes
When you combine lemons with these other medicinal ingredients, you get unique, natural homemade lemonade recipes that are great for your body. Read more »
Link copied!
Interesting Articles
Naturopathy
What Is Colloidal Oatmeal and What Are Its Benefits?