What to Do if Your Child Has an Imaginary Friend 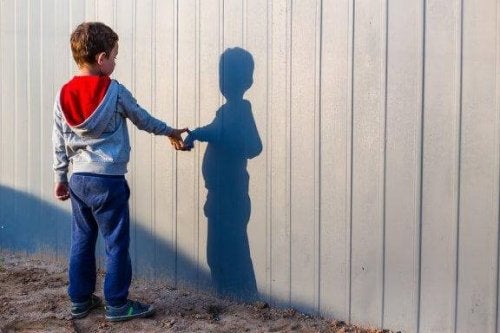 Many children have imaginary friends, or characters that stimulate creativity and help them to express their emotions. However, they may concern parents. This article will explain what to do if your child has an imaginary friend.

Why do Children Invent Imaginary Friends?

These beings that are created by the vibrant and imaginative minds of children can appear from the age of two when they begin to learn language and understand the environment they live in. Children invent them due to several reasons.

Parents are surprised to see their child playing and talking alone. When they ask their child who they’re talking to, they may respond calmly that they’re with their new friend. Although they can be a source of concern for parents, imaginary friends are part of children’s emotional development. Sometimes, they’re associated with highly creative and sensitive minds.

A study of 152 children aged 3 and 4 that was led by researchers Marjorie Taylor and Stephanie Carlson from the universities of Oregon and Washington respectively found that 2 out of 3 toddlers had imaginary friends. 70% of the sample were firstborns or only children.

However, the study performed suggested that there isn’t a direct relationship between loneliness and imaginary friends. Thus, imaginary friends help children express their feelings and improve their communication skills.

Nevertheless, we can’t dismiss them as signs of emotional deprivation or shock. They’re also allies who can help them cope with difficulties such as a divorce, the arrival of a new sibling, changing schools, or moving to a new city or country.

My Child Has an Imaginary Friend! What Should I Do?

Take a look at this article: Signs of Attention Deficit Disorder in Children

It’s recommended that parents meet their child’s new friend, as they would with a normal friendship. Asking your child about them will allow you to discover what they mean to your child and how to handle the situation better.

Don’t allow your child to use their new friend to break a rule or be naughty. Teach them discipline and how to accept responsibility, whether this “friend” exists or not.

Before you go, don’t miss: Five Tips to Prevent Temper Tantrums in Children

Although you should show respect and tolerance towards these imaginary companions, make sure your child spends time with other children. This way, you’ll stimulate their psycho-social skills, which may make their imaginary companion disappear.

When You Should Worry

If any of the following situations arise, we recommend the assistance of a psychologist or therapist:

As we always say, the time and attention you dedicate to your child are key to detecting any real problem.

The Consequences of Physically Punishing Children
Physically punishing children in any way is not education, but child abuse. Learn about the traumatic, negative affects of physical punishment on children. Read more »
Link copied!
Interesting Articles
Children
8 Crafts to Decorate a Children's Party

Interesting Articles
Healthy mind
The Wheel of Life: A Tool for Change