Food is an important factor in getting deep sleep. Check out the incredible benefits of bananas and cinnamon for sleep, and learn how to make a delicious, natural banana cinnamon tea. 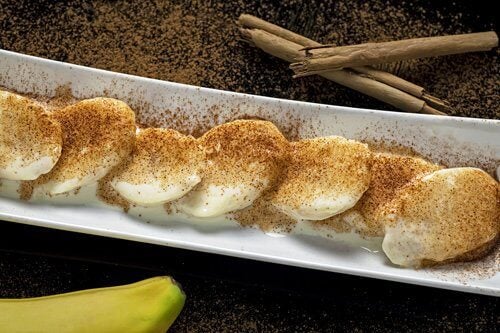 Today, we’re going to tell you about the incredible benefits of bananas and cinnamon for sleep, and show you how to make a delicious, natural banana cinnamon tea.

Life is always moving faster and faster. Never ending work days mean that a lot of people also have to take work home with them.

Luckily, many people have come to realize the importance of taking care of themselves. They’ve learned to set aside some time every day for the sake of their health.

The problem is that when it comes time to sleep, setting aside that time doesn’t always reduce high levels of stress. In case you didn’t know, stress is very unhelpful if you want to get a good sleep.

This is where it’s good to remember that food doesn’t affect your shape, it also affects all of your body’s internal functions.

This means that there are some products that relax you and others that energize you. So, we recommend making the first kind part of your diet, especially in the evenings.

Today, we want to talk to you about bananas and cinnamon, and how you can make banana cinnamon tea to help you sleep.

Bananas and cinnamon have gotten a lot of negative attention. This is partly due to their sweet flavor. It makes people think of both the fruit and the spice as foods that make us gain weight.

As a result, a lot of people take them out of their diet. But that’s a big mistake.

Believe it or not, cinnamon can help you get rid of fat. Meanwhile, bananas help you activate your muscles to help them when you work out.

How bananas can help you sleep

You’ve probably seen tennis players eating bananas between matches. It’s because of their magnesium and potassium content. These minerals prevent cramping and provide the body with energy.

The magnesium and potassium found in bananas can help prevent spasms while engaged in a difficult sport. This is thanks to the fact that they can help reduce muscle tension.

But their benefits go much farther than that. They can also regulate blood pressure and eliminate harmful substances that build up in your body.

Natural Way to Reduce Your Blood Pressure in 5 Minutes

As if that weren’t enough, these two minerals also encourage serotonin and melatonin production. These are both fundamental substances for sleep. They also produce pleasure and drowsiness.

Serotonin and melatonin are great substances to have in our bodies. When they’re present, they start to diminish the presence of cortisol. When that goes, so does a lot of your anxiety. For all these reasons, bananas are a great ally in getting deep sleep.

If you’re looking for a delicious and healthy addition, we suggest combining a banana with cinnamon.

How cinnamon helps you sleep

Believe it or not, cinnamon is great for getting rid of the sugar present in foods, making it a perfect companion for bananas.

Also, it eases digestion, which is very helpful in getting sleep. After all, if you have a heavy stomach or suffer from heartburn, it’s almost impossible to get good rest.

Plus, cinnamon helps circulation and regulates blood pressure. That makes it easier for you to relax.

As you can see, this spice bolsters the effects of bananas. It also counters some of their negative effects time, so you can eat bananas with cinnamon without fear of gaining weight or diabetes.

Remember, doctors recommend eating cinnamon to treat diabetes, coronary, and vascular problems. But now, let’s look at a delicious banana cinnamon tea recipe that can help you out if you’re having sleep problems.

This is a very easy recipe.

Along with being extremely simple, this banana cinnamon tea will come in handy for getting deep sleep. It’s best if you drink it an hour before going to bed.

Pair it with a relaxing activity. It won’t take long for you to notice its effects. You’ll be able to start your day with the energy you need.

Want to give it a shot? Let us know how it works for you!

Sleeping Well: 6 Habits to Get Enough Rest
Although many people don't really care, sleeping well is an essential habit for having a good quality of life. This biological need that all living creatures experience is important for physical and mental processes that influence your health. Read more »
Link copied!
Interesting Articles
Infusions
How to Make Orange-Cinnamon Iced Tea