Are There Bacteria in the Lungs?

The presence of bacteria in the lungs usually generates symptoms such as a cough, breathing pain, fever, and discomfort. It’s essential to know the clinical picture of bacterial pneumonias to get treatment as soon as possible. 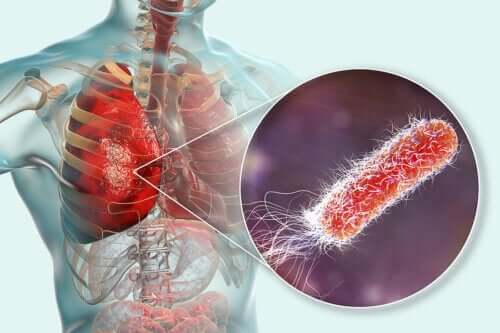 Symptoms such as chest pain, shortness of breath, fever, nausea, or vomiting are indicative of bacteria in the lungs. Although these microorganisms are essential for the optimal functioning of human physiological systems, their presence in these types of organs can lead to illnesses such as pneumonia.

Do you know why these bacterial infiltrations occur in the lung area? Are you in a risk group?

Knowing more about this is key to dealing with these diseases because we can take more preventative measures. Because of this, we’ll tell you everything you need to know about bacterial pneumonia in this article.

About microbiota and bacterial activity

First, it’s important to remember that the bacteria inhabiting the human body are mostly positive. Various microbiological studies have collected their benefits.

For example, bacterial colonies in the human intestine perform functions such as:

The normal microbiota is defined as the set of microorganisms that inhabit the body of living beings and perform various functions of a symbiotic or eater nature with its host. These colonies have both a spatial and temporal component, as their composition and presence may vary depending on where they live in the body and the age of the person.

The problem comes when bacteria colonize internal systems that don’t benefit from their presence. This is the case with bacterial pneumonia, which we’ll explain below.

Learn more: What are the kinds of bacteria in your mouth?

Are there bacteria in the lungs?

Overall, the lung microbiota does have it’s own healthy bacteria, but unhealthy bacteria may enter. Like any surface with outside contact, areas such as the nasal cavity, nasopharynx, and larynx have bacterial communities that are harmless to humans.

When these microorganisms enter the internal respiratory tract, it presents a clinical picture of pneumonia. This type of condition can happen to anyone, regardless of age or sex, although several statistical studies emphasize that it’s more common in newborns.

In addition, HIV patients also have a special risk for this condition, as they’re five times more likely to develop bacterial pneumonia than an HIV-negative person.

Why does bacterial pneumonia occur?

Streptococcus pneumonia usually causes bacterial pneumonia. In fact, some studies show that 40% of cases happen because of this microorganism. However, it may also be present in the colonization of other microorganisms such as:

Neutrophils surround bacteria with their membranes and release cytokines, thus promoting a typical clinical picture in bacterial infections. All of this could be summed up in the fact that there is inflammation in the pulmonary air sacs and respiratory distress.

Symptoms of bacteria in the lungs

Depending on the severity of the clinical picture and the causative microorganism, the symptoms may vary. That said, the following are general signs:

How do doctors diagnose bacterial pneumonia?

According to information from the Pan American Journal of Public Health, the radiological image of alveolar consolidation is accepted as a confirmatory criterion for suspected bacterial pneumonia. In affected patients, opacity in lung tissue is usually observed, but this isn’t always true.

At times of suspicion, the cultures of the patient’s expectorations can always be taken to confirm the presence of bacteria.

As in all cases of bacterial infections, antibiotics will be the drugs of choice. The doctor, after determining whether they’re Gram-positive or Gram-negative bacteria, may suggest the use of several medications, such as amoxicillin, cephalosporin, or doxycycline.

In the presence of varied treatments, it’s necessary to establish the exact genus of the microorganisms that cause the disease. Therefore, it’s possible to choose the most effective therapeutic options for each case.

This may interest you:  The differences between viruses and bacteria

What to keep in mind about bacteria in the lungs

According to the American Lung Association, there’s actually a vaccine for pneumonia caused by streptococcus pneumonia, the most common illness. This is often recommended for infants under two years of age, and adults over 65, as they’re the typical vulnerable groups.

In addition, at risk of getting it at another age range, the outlook is positive if treated early and there are no complications.

Bacteria are essential microorganisms, as they protect against pathogens in many of the body’s systems. However, their uncontrolled condition can cause health problems. Therefore, if you think you have a bacterial infection, it’s essential to seek medical attention immediately.

What Are Germs and Where Are They Found?
Many people use the term "germ" when it comes to diseases, especially when explaining diseases to children. But do you know what microorganisms this term encompasses and where they are found? Read this article to find out! Read more »
Link copied!
Interesting Articles
Anatomy and physiology
The Causes of Bradypnea and its Treatments