What Is Normal Microbiota?

The normal microbiota of the human body is endless in terms of complexity. Some bacteria are essential and remain forever, while others are only in the body temporarily. 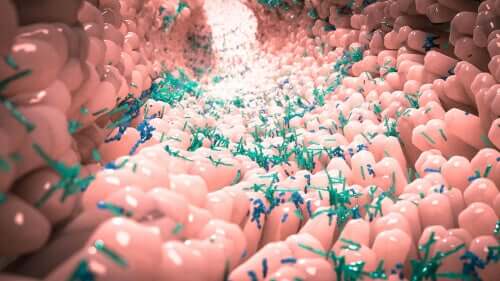 Bacteria are microorganisms that, despite their small size, play an essential role in the functioning of our world. Scientists estimate that they represent 50% of the total biomass on the planet. Human beings also show indispensable relationships with them through their normal microbiota.

In this article, we’ll show you what the normal microbiota of your body is, and what it’s made of, also called the microbiome.

What is the normal microbiota?

The normal microbiota or microbiome is defined as the set of microorganisms that are commonly found in our body in healthy individuals, distributed in different parts of the body.

This interaction is a symbiotic relationship between the host and the bacteria, since both parties benefit from the relationship. Some of the benefits are the following:

The normal microbiota is essential in the proper functioning of our physiological systems. Sources like the National Autonomous University of Mexico estimate that humans have around 100 billion microorganisms in their bodies. This shows that we can’t conceive of our existence as it is today without the microbiome.

The term flora is used in an erroneous way if we analyze the use of the word, since it has been established that bacteria are not related in any way to vegetables. For this reason, it’s better to refer to the different bacterial populations grouped by their functions as microbial ecosystems.

The set of all these populations give rise to the normal microbiota, which we divide into two categories:

This general term can also be qualified according to the residence time of the organisms:

Therefore, the bacteria in our intestinal tract would be an example of a native and latent microbiota. They’re necessary for the proper functioning of the digestive system and remain with us throughout life.

Learn more: The Differences Between Viruses and Bacteria

What is the normal microbiota made of?

In a healthy living being, internal tissues such as blood or the brain are free of bacteria. By contrast, the external tissues and those surrounded by mucosa, such as the intestine, skin or pharynx, have abundant symbiotic microorganisms.

Covering all the significant species present in the normal microbiota is practically impossible. For this reason, there are lists of the most common species by body region, according to their common, occasional, rare, or possible pathogen presence. The microbiota has a very clear representation in certain regions such as:

As we’ve been able to see in a general way, the normal microbiota of the human body is infinitely complex. Certain ideas have to be clear to us: some bacteria are essential and always remain in the body, while others are in our body temporarily.

These bacterial populations vary according to the region and the individual, but the set of all of them make up the normal microbiota of the human being.

What Are the Kinds of Bacteria in Your Mouth?
There is a large amount and variety of bacteria in your mouth. The majority of these bacteria are fought by the enzymes in your saliva, but there are many that survive and live in different areas, sometimes causing health problems. Read more »
Link copied!
Interesting Articles
Anatomy and physiology
Why Are Some People More Sensitive to Pain than Others?