Here are fourteen little-known psychological disorders to read about. You may not have known about them and may find them interesting! 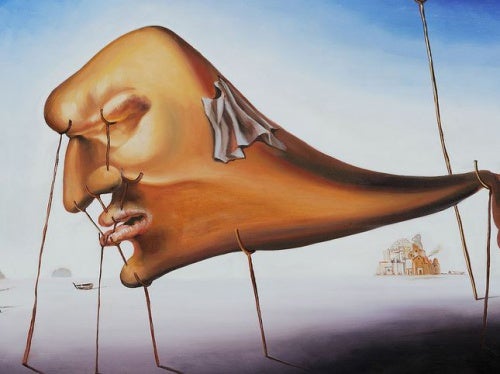 The human mind still is one of the greatest unknowns. There are many psychological disorders, delusions, dissociative states, overwhelming experiences, and brain abnormalities… The list just goes on and on.

The human mind has the ability to fascinate us. In this regard, while most people have heard of mental disorders like schizophrenia and obsessive-compulsive disorder, there is a long list of other psychological disorders that are extremely strange and unusual.

The people who suffer from this condition are firmly convinced that someone close to them has been replaced by an identical imposter. This type of delusion is more common in people with schizophrenia, although it also manifests in patients with dementia, epilepsy, or also head injuries.

This is the opposite of Capgras delusion. In this case, the distressed sufferer believes that different people are, in fact, the same person. In this sense, they believe this person is able to change their appearance and become another.

The affected person believes that they’re dead and don’t exist. They believe that their body is rotting. In addition, they may believe they’ve lost all their blood or internal organs. Also, it’s more common in patients with psychotic depression or schizophrenia.

4. Paramnesia: One of the little-known psychological disorders

This disorder is characterized by the delusional belief that a place has been replicated. For example, a patient may believe that the hospital where they’re staying was copied and also exists somewhere else. In this sense, it’s as if they feel like they’re experiencing parallel worlds.

People who suffer from this disorder believe that their hand doesn’t belong to them, but that it has its own agency.

In this sense, sometimes people with alien hand syndrome believe that they’ve been possessed by a spirit or something similar. Generally, this manifests in people who suffered damage to their corpus callosum, which connects the two brain hemispheres.

Dysmetropsia is a neurological condition in which the perception of images, space, and time become distorted. The most disturbing symptom is the alteration of one’s body image. This is because the sufferer may be confused about the size and shape of their own body parts. Consequently, this causes fear and also anguish.

Doctors associate it with migraines, brain tumors, drug use, and infections. The best treatment is rest. It’s sometimes also referred to as Alice in Wonderland syndrome.

Jerusalem syndrome is characterized by obsessive ideas, delusions, or other themes related to religious experiences. They’re triggered by visiting the city of Jerusalem.

The syndrome isn’t limited to any particular religion and it often manifests in people who have a history of mental illness prior to their stay in Jerusalem. In addition, these delusions or obsessive thoughts tend to dissipate after leaving the city.

It seems to be a severe case of culture shock, leading to physical and emotional symptoms of anxiety, including loss of reality, delusions, hallucinations, and more.

Of the six million Japanese tourists who visit Paris every year, only about 20 suffer from it. Suspected triggers may be idealization, the language barrier, physical and mental fatigue, and also confrontation with radically different cultural habits.

The people who suffer from this unexpectedly and perplexedly wander from place to place without being aware of their identity and the reason that led them there.

In general, these episodes are precipitated by suffering, a strong period of emotional and physical stress, the ingestion of psychotic drugs, or certain medical conditions

10. Foreign accent syndrome: One of the strange psychological disorders

The people who suffer from this syndrome speak their native language with a foreign accent. It’s a rare disorder that usually manifests after a major head injury or any injury that affects the brain’s speech nuclei.

Discover: 5 Strategies Every Woman Should Use to Say Goodbye to Stress and Anxiety

It’s characterized by sympathy and loyalty that a kidnapped person feels toward their abductor. It has been described in cases of kidnapping, rape, child abuse, spousal abuse, and more.

Curiously, this syndrome received its name after a bank robbery in Stockholm (Sweden) in 1973. The hostages were so attached to their kidnappers that many refused to even testify against them.

This is the opposite of Stockholm syndrome. The hostages end up eliciting sympathy from their captors, who succumb to their desires and needs. It’s possible that this reaction emerges from feelings of guilt and moral indecision on the part of the kidnappers.

The name came from a hostage situation at the Japanese Embassy in Lima (Peru). Fourteen members of the Tupac Amaru Revolutionary Movement held hundreds of people hostage for several days, including diplomats and the military.

Over time, the kidnappers freed the hostages.

Stendhal syndrome is characterized by physical and emotional anxiety, dissociative experiences, confusion, and even hallucinations that a person has when they contemplate a work of art.

This usually happens when they see a particularly beautiful or exaggerated piece of artwork. Usually, the experience is limited and the affected individuals don’t need more intervention than minimal support measures.

Hoarding is characterized by extreme neglect, social isolation, apathy, and the compulsive collection of rubbish. It manifests mainly in the elderly and healthcare professionals associate it with progressive dementia.

The disorders we’ve described in this article are only a few of the enormous list of amazing psychological disorders that will leave you stunned. We hope you enjoyed reading about them!

Atypical Depression: Symptoms of the Most Difficult Disorder to Diagnose
The problem with atypical depression is that the affected person may not be aware of what's happening to them. They feel tired and things affect them more. Read more »
Link copied!
Interesting Articles
Healthy mind
11 Strategies to Help You Be Smarter