Why is it Hard To Breathe when I Do Exercise?

Why is it difficult to breathe when doing physical exercise? In this article ,we'll tell you everything you need to know about this common and normal occurrence. 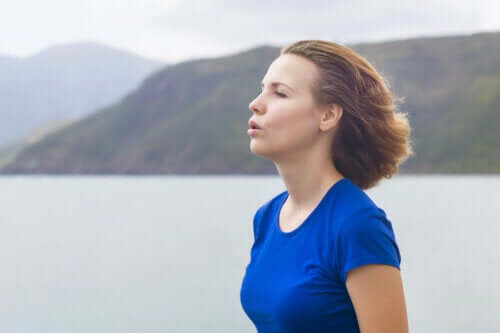 More and more people are becoming aware that physical activity is a fundamental part of having a healthy lifestyle. However, not doing it too often or exercising incorrectly can make it hard to breathe while exercising.

Difficulty breathing when playing sports can manifest as shortness of breath, cough, narrowing of the throat, or wheezing (whistle-like noise when air passes through your throat). Overall, there are many reasons why breathing problems can develop during physical activity.

In this article, we’ll analyze everything associated with breathing during exercise.

What function does breathing have?

Breathing has several functions. However, the most important is to maintain the functionality of the body by:

In order to define respiration, you have to understand the concept of ventilation and the types that exist.

On the one hand, we have pulmonary ventilation, which is the process by which air enters and leaves the lungs. This mechanism occurs through the neural activation of the respiratory muscles and the pressure differences between the lungs and the outside air.

On the other hand, all this air that you breathe doesn’t reach the alveoli to produce gas exchange and be able to carry oxygen to the tissues. Instead, it remains in the airways (bronchi, trachea, etc.). This unused air occupies a volume called “anatomical dead space.”

If we subtract the volume of air that enters through pulmonary ventilation, and that of the air from the physiological dead space, it gives rise to the air that actually does reach the alveoli and is used. This volume that reaches the alveoli is part of the alveolar ventilation mechanism.

Therefore, depending on the way you breathe, if you do it deeper or shallower, if it’s hot or cold, or if you’re exercising or not, the amount of air that actually reaches the alveoli can vary.

There are two different types of ventilation. However, both are represented by the same variables (with some differences). This is because this process is essentially defined as the volume of air that enters per minute when you breathe. This is found by multiplying these two quantities:

Therefore, the ventilation of a healthy person is usually about 6 liters per minute.

Keep reading: Why You Need to Get Regular Physical Exercise

Breathing when exercising: What happens?

Due to these processes, the blood that circulates through the muscular tissues remains without oxygen and acidified. This can endanger your body. Fortunately, to prevent this from happening, the brain, through receptors that it has distributed throughout the body, becomes aware of these alterations and causes you to:

Therefore, if your respiratory rate and respiratory volume increases, pulmonary and alveolar ventilation will also increase. Basically, this means:

Stages of breathing during exercise

According to studies, researchers have determined that there are three stages when you exercise. In the first and second stages, the ventilation rises abruptly in order to carry out the activity. Upon reaching the third stage, the body adjusts and ventilation remains stable.

You may be interested in: Exercise and Pregnancy: Things to Consider

Why is it hard to breathe when I exercise?

If you’re not used to exercising, at first you might feel suffocated. However, this effect is completely normal. Your respiratory system has to exert itself in order to keep maintain normal blood conditions and keep them from changing in the ways we mentioned.

However, as you continue to exercise, breathing becomes easier, since your body becomes accustomed to the new situation. On the other hand, you should know that it’s doesn’t feel the same when you exercise with the same intensity all the time as when you do an exercise that increases in intensity.

In an exercise that gets more intense over time, your body won’t get used to it and will continue to demand more oxygen. Therefore, you’ll breathe even faster. Of course, you’ll continue to draw in the same volume of air for each breath.

Difficulty breathing during exercise can indicate that you’re not used to it. However, it’s important to note that it can also be a sign of other respiratory or cardiovascular conditions. Therefore, you should pay attention to symptoms such as:

If you experience any of these symptoms, you should go to the doctor to determine if they’re caused by an underlying condition. If so, the professional will direct your treatment depending on the problem.

Fire Breathing in Yoga: 6 Benefits
This article explains fire breathing and gives the many benfits of practicing this yoga exercise. It is very beneficial to the mind and body. Read more »
Link copied!
Interesting Articles
Exercise and sports
Options for Creating Your Own Punching Bag at Home

Exercise and sports
The Differences Between Karate and Taekwondo

Karate and taekwondo are two commonly practiced martial arts that can be difficult to tell apart at first glance. They're…