Atypical swallowing is a condition that affects the human swallowing process. It has dental, digestive, and respiratory consequences. In this article, we'll explain what it is and how doctors diagnose it. 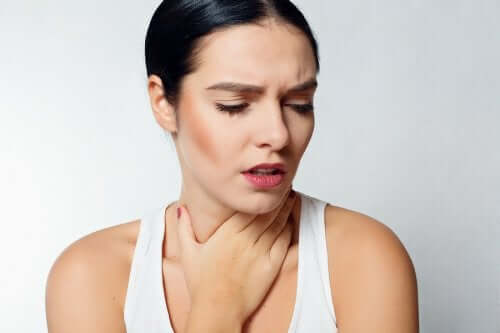 For a person to be diagnosed with atypical swallowing, their tongue must adopt an inappropriate posture when swallowing. This means that the tongue is positioned in a place that doesn’t favor the ingestion of food.

Physiologically, the tongue plays a unique role in the swallowing process. When food enters the mouth, the tongue directs it towards the pharynx so that it can make its way to the digestive tract.

Atypical swallowing is when the tongue has a counterproductive posture during swallowing or is used in a way that doesn’t favor this food transit. In fact, it’s more functional than anatomical in its nature.

The phases of swallowing

Swallowing usually has three phases. These phases are: oral, pharyngeal, and esophageal. In atypical swallowing, the first phase is altered.

The symptoms of atypical swallowing

A series of signs make it evident that a person suffers from atypical swallowing. These are the same signs health professionals analyze to diagnose the disorder.

Keep reading to learn more: Symptoms and Treatment of Adenoiditis in Babies

The causes of atypical swallowing

Atypical swallowing is more common in children than in adults. This is partly because the causes are related to the development and congenital anatomical structure at birth and growth during the first years of life.

Here are the most common causes of atypical swallowing:

Keep discovering in this article: How to Naturally Soothe Swollen Tonsils

There are no specific drugs to treat atypical swallowing. The treatment consists of reeducating the tongue and solving the cause that may be behind the disorder.

If the patient suffers from tongue-tie or adenoid hypertrophy, they’ll need surgery. However, after surgery, they’ll still require subsequent rehabilitation.

One of the professionals that usually plays a role in rehabilitation is the orthodontist. Their role in the treatment is to correct malpositioned teeth so that the upper and lower arches take the normal positions.

In short, parents need to pay attention to their children, including how they chew, how they breathe, and how they speak. If you believe your child may suffer from atypical swallowing, you’ll need to take them to see a doctor.

Pimples on the Tongue, How to Remove Them?
To avoid having pimples on the tongue, the best measure is to practice proper oral and dental hygiene. But if they do occur, how can you remove them? Read more »
Link copied!
Interesting Articles
Anatomy and physiology
A Fracture or a Sprain: What's The Difference?