What Is the Egestion Process?

Egestion is the process by which the remains of food that haven't been used by the body are eliminated. It corresponds to the final phase of the food digestion process and is not the same as excretion. 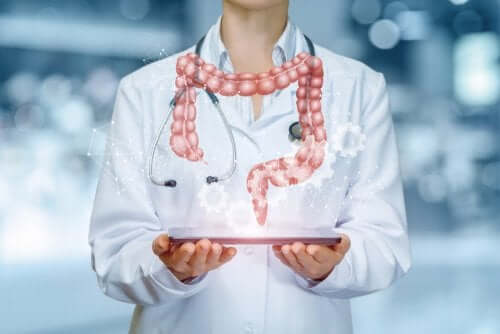 In general terms, the egestion process is the physiological process by which the body eliminates undigested food. This elimination takes place in the form of feces and constitutes the final phase of the digestive process.

In single-cell organisms, the egestion process involves only the expulsion of undigested substances from the cell to the outside. In multicellular organisms, such as human beings, this process is more complex.

Sometimes people confuse egestion with other similar processes, such as excretion. Although both are associated with digestion, they’re different physiological processes. Let’s see what they consist of.

The main function of the digestive system is to process food. The objective is to extract from them as many nutrients as possible and, at the same time, eliminate the substances that can’t be used and, therefore, must leave the body.

Digestion begins when food enters the mouth. In this phase, the saliva is mixed with the food and with it begins its process of decomposition. This combination forms the food bolus, which then passes into the esophagus and then into the stomach.

Later, it reaches the small intestine. There, nutrients are separated and absorbed. They’re then introduced into the bloodstream so that they reach the whole body. However, larger and/or less soluble substances can’t be absorbed or used. This results in egestion.

What is the egestion process?

Egestion is the last function of the digestive system. Undigested food remains in the small intestine to go up through the ascending colon. There, a process of reabsorption of water and certain elements, such as sodium, takes place. Likewise, the body also absorbs folic acid and vitamin K, for example.

The remains continue their progress through the transverse colon and then down the descending colon. There, the body stores them in the form of feces. Then, this material goes to the rectum, which opens to the outside through the anus. Finally, defecation occurs.

This whole process is the egestion process. Feces contain bacteria and fiber, as well as metabolic products of the liver and other materials that haven’t been used. The body expels the feces between 36 and 48 hours after ingesting the food, under normal conditions.

Sometimes people confuse egestion with other processes, such as excretion. Although they have some similarities, the truth is that they’re different physiological processes. Let’s see how they differ from each other.

Egestion is the elimination of substances that came with food and that the body can’t use. This includes non-digestible substances and materials harmful to the human body. It corresponds to food that wasn’t able to enter the bloodstream and therefore must be eliminated in the form of feces.

Also read: How to Make 5 Teas to Detox Your Colon

The excretion process also results in eliminated substances. The difference is that the substances expelled in the excretion have been previously used by the body to maintain various vital functions. The process that takes place, in this case, is inside the cell.

The cells need energy to be able to function and they obtain it from nutrients. These arrive in the form of organic molecules, which are broken down by the cell to produce energy. At the end of this process, the body produces waste which it finally eliminates through the urine.

Discover: Why Your Urine Smells after Eating Asparagus

Sometimes, the body doesn’t carry out the egestion process properly and some problems appear in the elimination of the feces. This may be due to illness or an inadequate diet. The most common problems are the following:

Is Digestion Slower in the Summer?
Digestion is more complicated in summer, and not only due to heat. We tend to eat larger portions of foods that are more difficult to digest. Read more »
Link copied!
Interesting Articles
Anatomy and physiology
The Causes of Stained Teeth