What Is Permarexia and What Causes It?

In addition to anorexia and bulimia, there are other eating disorders that important to be aware of. An example of this is permarexia. Keep reading to find out more about it. 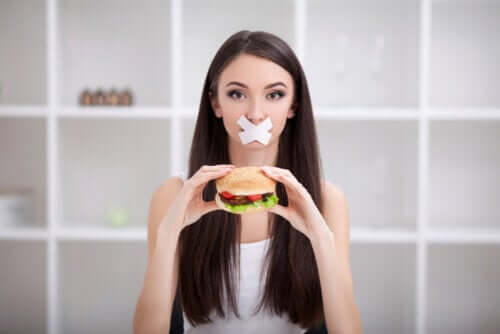 Permarexia is an eating disorder that specialists have only recently identified. It’s considered to be a step towards more serious conditions like anorexia or bulimia. Individuals with this disorder have an uncontrollable desire to be thin, and believe that anything and everything they eat will cause them to gain weight.

For this reason, those with permarexia often subscribe to different ‘miracle’ diets, with the intention being to lose weight. In fact, this is part of the criteria used to diagnose the illness: trying more than three different diets in a year in order to lose weight.

Given that it’s a recently identified condition, there’s still not a lot of information available about it. However, there’s a link between people that show certain compulsive behavior, such as calorie counting, and those with the disorder. Despite the fact that reviewing nutritional values can be beneficial, doing this obsessively can become a problem.

That said, many people suffering from permarexia have not yet been diagnosed. These people fluctuate in weight and often change their dieting habits, but don’t outwardly appear to be unwell. For this reason, they’re not likely to receive an exact medical diagnosis regarding this disorder.

Those that are frequently changing their eating habits, always hoping to lose weight, are likely to be permarexic. Individuals with this condition are also especially sensitive to comments about their body; they tend to constantly compare themselves to the other people in their lives.

Although there’s solid evidence for the relationship between depression and anorexia, it hasn’t yet been possible to extend that association to psychological problems and permarexia.

How to identify whether someone is suffering from permarexia

Diagnosing this illness isn’t an easy task. There are no screening tools that allow for the exact identification of the problem. The best way to diagnose it is to observe the individual’s patterns and conduct several tests that will determine their mental state.

Those that demonstrate certain obsessive behavior in relation to food, but don’t fit the clinical framework for anorexia or bulimia, may possibly be diagnosed with permarexia.

It’s important to focus on the individual’s eating habits and their relationship with food. It’s also worth knowing how susceptible a person is to external criticism. If other people’s opinions truly affect them, their risk of suffering or developing an eating disorder increases.

As previously mentioned, if, over the last year, the individual has subscribed to three or more different diets, with the intention of losing weight, then they’re a cause for concern. If that’s the case, it’s best to contact a professional as soon as possible. Early prevention and treatment are the best solutions for food-related disorders, and this also reduces the risk of complications.

You may like to read: Diabulima: Diabetes and bulimia

Studies have shown that the factors related to the appearance of this kind of problem are:

Furthermore, according to an investigation published in Child and Adolescent Psychiatric Clinics of North America Magazine, there’s often an excessive amount of information available about food-related disorders, like permarexia, on social media. A poor interpretation of that information, due to a lack of technical knowledge, can cause these damaging habits to form.

As we’ve already mentioned, permarexia is an illness that has only recently been identified, and there’s still not a lot scientific evidence about it. We know that it can be the first step in the development of bigger issues, and diagnosing it early helps to manage and cure it.

Overall, the criteria for identifying this disorder isn’t clear, which is why it’s important to visit a specialist and trial various screening tests.

Remember that disorders related to food are complex and require a multifaceted treatment. It’s essential to tackle the problem from different angles in order to find a trusted solution that reduces the risk of medium-term consequences.

We can’t stress enough that the best course of action is to visit a specialist to receive more information about permarexia. Focusing on the details can be key when detecting the problem early on and preventing complications.

Five Powerful Vegetables You Should Be Eating
Vegetables and fruit are rather powerful so they're essential in a well-balanced diet. In fact, their daily consumption can prevent metabolic diseases. Read more »
Link copied!
Interesting Articles
Illnesses
Open-Angle Glaucoma: What Does it Consist Of?