Have you heard of sadorexia? Here we'll tell you all about this increasingly common eating disorder among adolescents that's dangerous to their health. 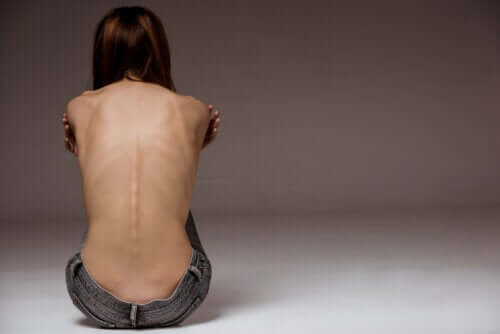 Sadorexia is an increasingly common eating disorder that combines two conditions: anorexia and a set of violent sexual practices. There are still not many research trials on this subject, so the knowledge we have today about the pathology is limited.

As we mentioned, sadorexia combines a strong restriction of food intake with a taste for sadomasochism. In other words, violent sexual practices that involve pain. According to research published in the journal Endocrine, Metabolic & Immune Disorders Drug Targets, anorexia is an obsession with extreme thinness that drives the individual to drastically reduce food intake.

In turn, people with sadorexia often have a taste for certain behaviors that involve pain or physical abuse. They derive sexual pleasure from self-induced vomiting or flagellation, which leads to self-harm.

According to recent studies, this type of practice could have to do with sex hormone levels or some specific neurological patterns.

A distorted body image adds to the sadomasochism in this disorder.

To learn more: Tanorexia: When Being Tan Becomes an Obsession

The causes and detection of sadorexia

The causes of sadorexia are very diverse and not all of them are well identified. There is extreme concern about physical appearance which, along with social pressure, pushes the individual to strive for an unhealthy thinness.

There are even scientific tests that assure that eating disorders respond to a base of genetic alterations. In that light, environmental conditions could simply be the match that lights the fuse of the problem.

What’s clear is that the social context and the education a person receives condition the risk of developing this type of problem. Traumatic events experienced throughout life also provide a possible substrate for the emergence of an eating disorder of any kind.

As far as detection is concerned, there are screening and psychological tests that facilitate diagnosis. Nevertheless, only a qualified professional can perform these tests.

With these tools it’s possible to recognize the risk behaviors typical of sadorexia. It’s worth noting that the sooner detection takes place, the higher the success rate of subsequent intervention.

You may also be interested in: Diabulimia: Diabetes and Bulimia

When talking about the treatment of sadorexia, it’s important to make special mention of the need for a multidisciplinary team. This team must consist of a nutritionist, a psychologist, and a psychiatrist. Only by working together is it possible to reverse this condition.

In the most severe cases, when the patient shows malnutrition, hospitalization may be necessary, as we see in a publication in the Chilean Medical Journal. When malnutrition occurs, doctors will need to infuse intravenous serum enriched with nutrients to prevent serious metabolic problems.

In the case of outpatient treatment, nutritional education is essential. At first, it may be best to propose a dietary model based on minimums, which covers basic needs. From this point on, it’s important to demystify concepts and gradually include varied products in the individual’s diet.

In addition, it’s important to accompany this intervention with psychological support based on behavioral change. It’s crucial to establish pharmacology guidelines to improve mental stability and prevent excessive risk practices or suicide attempts.

The treatment approach of this increasingly common eating disorder must be multidisciplinary, since it affects several areas.

As we mentioned, sadorexia is a relatively recent disorder as regards its classification. However, it’s an increasingly common eating disorder when it comes to psychological and nutritional consultation. The treatment approach is very similar to that of any other eating disorder.

A multidisciplinary team must come together to approach the pathology from different points of view, thus producing synergy. The most serious cases may require hospitalization as it’s important to avoid long-term damage as much as possible.

Behavioral therapy and psychological therapy will greatly help to minimize risk practices that may be harmful to health. If you suspect that someone in your environment may be suffering from this problem, consult a professional as soon as possible.

Eating Disorders in Autistic Children
Eating disorders are common in autistic children but they're generally secondary to the characteristic alterations of this disorder. Read more »
Link copied!
Interesting Articles
Illnesses
Everything You Should Know about Hypochondriasis