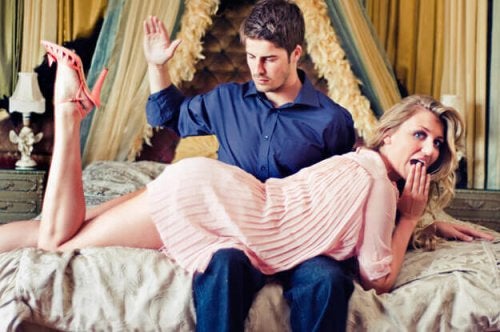 Did you think that you knew everything there was to know about the world of sex? Don’t worry. It’s a topic that’s so wonderfully broad and vast that there’ll always be something new to learn.

A caress, a spark, a touch…these are all characteristics of physical interaction and flirtation between human beings. But what happens when we get into the realm of hitting the other person in a relationship?

Regardless of the roles, agreements or terms that a couple or group of people may have established, communication is key. Communication is the only way to keep sexual relationships favorable and positive–regardless of how liberal or conservative the practices themselves are.

Spanking: yes or no?

Imagine that you’re with your partner, and you’re just starting to get intimate. Then, they grab you and whisper, “spank me“. You get nervous and antsy about responding–you don’t whether you want to or not. So, should you give them the spanking that they wanted?

In the end, it’s up to your personal judgment and what you’re comfortable with. But, it’s also worth talking about the origins and roots of this sexual practice.

People do spanking as a form of sexual activity. It involves consensual and measured domination, which provides mental and sexual stimulation. But, is there really pleasure in hitting?

While every couple or group may be different, and have different preferences for how hard the spanking is, at the end of the day, spanking is still a minor act of harm against the body.

There are also some interesting ethical, moral or social contexts to learn about when it comes to this common, taboo sexual practice.

If you’re interested in the topic, even just a bit, and you’re looking for some “flavor” in your sex life but don’t know how to find it, you should learn more about this practice below. It might turn out to be right for you.

There Are 5 Things that Are Always Better to Keep Secret…

Unjustified violence or a manifestation of sexual spontaneity?

For a long time, and until very recently, psychiatry and general medicine considered these practices to be vile, worthy of psychiatric monitoring.

It was only when new definitions came into modern psychiatry that these disciplines stopped seeing spanking-related sex games as filthy practices.

But we should also point out that the American Psychiatric Association maintained their original definition about spanking for a long time. While we’re on the subject, they also didn’t erase homosexuality from their list of Mental Illnesses until 1973, so they’re not necessarily a good example.

Everything starts somewhere, and this controversial sexual practice is no exception. Spanking, according to the Cambridge Dictionary, mainly has to do with punishing someone (especially a child) for doing something wrong.

That goes to show that this sexual practice is relatively new for the general public, and still not what most of us think about when we heard the word.