Eating disorders are relatively common in autistic children. It's important to address them in a timely manner to avoid possible nutritional deficiencies and complications. 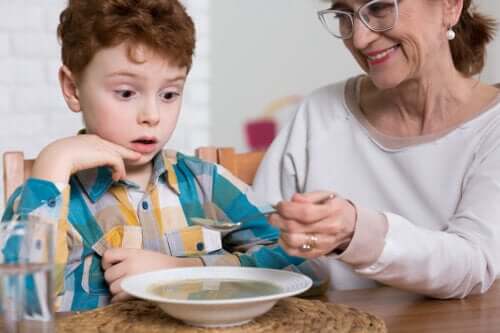 Eating disorders in autistic children are common. They can have many causes, although they’re generally secondary to the characteristic alterations of this disorder. They often have varying degrees of intensity.

Keep in mind that autism spectrum disorders (ASD) are a group of disorders of the central nervous system that affect brain function. Its onset is usually during childhood and problems in neuronal functioning translate into difficulties in the areas of social interaction and communication skills.

The area of eating is often affected in autistic children. Its causes have to do with the following:

Thus, autism can impact a child’s diet in several ways. Continue reading to find out what the main eating disorders are in children with this condition.

Discover The Five Most Common Signs of Autism

Due to the limited selection of foods, and the strong aversions that some of them can arouse, the diet of children with autism can be limited. They may reject specific foods, an entire group, foods with a certain color or texture, and so on.

They also tend to have a preference for one type of preparation or presentation. In general, and without it being the norm, autistic children tend to favor red, yellow, or orange food and usually reject grainy, viscous, and astringent textures.

Children with autism have trouble focusing on a single task for long periods of time. Therefore, it’s difficult for them to sit at a table through an entire meal.

Added to the restrictive food choices factor we mentioned above, their diets end up being insufficient in terms of energy and nutrients.

In addition, there may be difficulty establishing the roles of power and acceptance of imposed limits. Thus, it’s the children who take full control of their eating, as they choose what to eat, what not to eat, and in what quantities.

Classical conditioning is the existence of a stimulus-response that happens as a result of an experience. As a result, it’s common for autistic children to have an aversion and reject certain types of food if their previous experience with it was negative.

Negative experiences could be:

In addition, their negative memory can be extended to similar foods and this reduces the variety of food they’re willing to eat.

Some of the medications used for treating autism spectrum disorders (ASD) have an impact on children’s diets. They may cause a decrease or increase in their appetite and can prevent the absorption of some vitamins and minerals.

This is why it’s important to know the side effects of the treatments and discuss them with the professionals who work with the autistic child.

Autistic children often have some symptoms related to the digestive system and food. These include:

In any case, you should realize that the appearance of these symptoms isn’t caused by autism, but by the eating disorders that derive from it.

For example, restricting some fruit and vegetables could lead to diets that are low in fiber. Thus, the child is likely to develop constipation problems. They’ll also end up with chewing difficulties and a deficit that’ll lead to poor digestion and flatulence.

However, you must pay attention to the frequency and intensity of symptoms. You should assess the possible existence of an allergy or food intolerance, because these are very common during childhood.

Intervention in the eating disorders of autistic children

You must take immediate action when faced with an eating disorder in a child, especially if they’re autistic. Perhaps you don’t consider it a priority, but nutritional deficiencies during childhood often lead to malnutrition.

This is an added problem for a child’s proper development and growth. A meta-analysis of scientific studies found that the diets of autistic children contain less protein and calcium than those of “normal” children.

Thus, you must address any food problems your child may have in order to find an adequate solution for them. In addition, specialists highlight the need for a diet adapted to every child (adapting to their preferences) and to maintain control of their nutritional status.

Only this way can they improve their eating habits and prevent possible future problems related to a poor diet.

Finally, it’s essential to address eating disorders in autistic children in a timely manner in order to avoid complications during their development. Thus, any eating disorder is a reason to consult a pediatrician, nutritionist, or other medical professionals.

How to Help Children with Autism During Lockdown
Caring for children with autism during lockdown should focus on creating a peaceful environment with specific routines and clear information. Read more »
Link copied!
Interesting Articles
Children
8 Crafts to Decorate a Children's Party