What Is Lazy Eye? All You Need to Know

Untreated lazy eye can lead to functional blindness. This disorder usually appears in childhood, and can be treated if detected early. 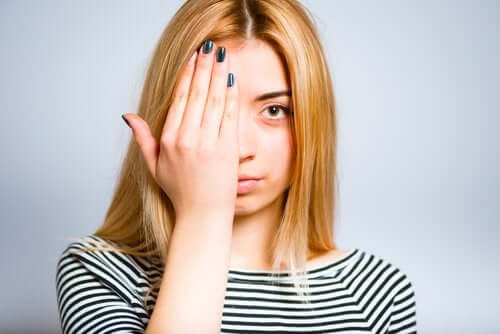 “Lazy eye” is a condition where there is a loss of visual acuity in one or both eyes. However, there’s not a deficiency or structural abnormality in the eyeball. The problem has another name, amblyopia, and is common in children.

Researchers estimate that lazy eye is present in 4% of children. If not treated before 8 or 9 years of age, it can become an irreversible visual defect. In fact, it’s considered to be one of the main causes of vision loss in developed countries.

However, the lazy eye doesn’t achieve 100% visual acuity, even if there’s optical treatment. In recent years, scientists found that using electronic devices, like tablets or cell phones, speed up lazy eye, and make its symptoms worse.

What is lazy eye?

Lazy eye, or amblyopia, is a disorder that leads to a decrease in visual acuity, without any abnormality in the structures of the eyes. Also, there isn’t a disease that causes the problem. In this case, there isn’t full vision, even if you get corrective treatment.

Check this out: 5 Things Your Eyes Say About Your Health

Usually, this disorder only affects one eye, but there are also many cases where it affects both eyes. There are several types of lazy eye or amblyopia. They are:

Lazy eye is a consequence of the lack of development in the connection between the eye and the brain. What happens is that the brain learns to ignore the information coming from one of the eyes. Sometimes, over time, it ignores information from both eyes. It’s not a problem in itself, although it can be the cause or effect of eye problems.

The most common cause is strabismus. In this, the muscles fail to align the eyes properly. This causes the brain to get a different image from each eye. To fix that confusion, the brain systematically ignores one of the images.

This means that one of the eyes isn’t used. Then, the area of the brain that corresponds to it doesn’t develop. Also, it’s common for the difference in images to be because each of them has a different degree of myopia, hyperopia, or astigmatism.

In those cases, the brain also ends up prioritizing one eye over the other. Other conditions also cause vision problems that lead to lazy eye. The main ones are clouding of the lens and infantile cataracts, among others.

The earlier doctors detect lazy eye, the greater the chances of treating it successfully. Still, treatments work well in adults too. This is especially true when the person has strong motivation and commitment.

The American Optometric Association recommends getting a first eye exam at 6 months old. Ideally, the second test should be at 3, then again before going to school.

Sometimes, doctors don’t detect lazy eye early. In fact, it’s sometimes confused with developmental or other disorders. A child with a lazy eye may have motor development delays, and may even pass for autistic, but it’s really from amblyopia.

Also, children with lazy eyes tend to read more slowly than kids with normal vision. Of course, this can cause academic, social, and even behavioral problems. Therefore, early detection is very important.

Crossed Eyes: Symptoms and Treatments
It's normal for newborn children to cross their eyes occasionally. However, if it goes on beyond their first four months of age, it may be strabismus. Fortunately, early diagnosis significantly improves a crossed eyes prognosis. Read more »
Link copied!
Interesting Articles
Illnesses
Risk Factors for Mouth Cancer