What Does a Vasectomy Involve?

A vasectomy is a simple, safe and highly effective surgical procedure used as a contraceptive method for men. It doesn't affect a person's sex life and in many cases is reversible. 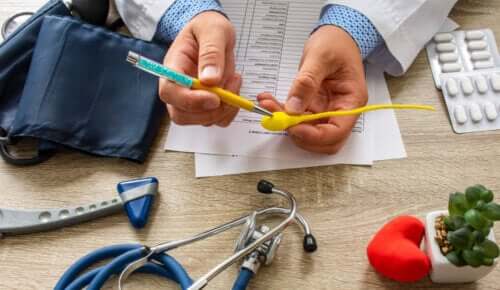 A vasectomy is a simple surgical intervention that’s a form of male birth control. It’s a very safe and highly effective method to permanently prevent pregnancy.

There are more and more men opting for vasectomy these days. However, it’s a decision that implies awareness and responsibility regarding birth control. It isn’t recommended for young men who don’t have a partner or who are going through a relationship crisis.

A man should only have a vasectomy if he’s completely sure that he doesn’t want to father a biological child in the future. This is a relatively permanent method and therefore a decision that deserves careful consideration.

What is a vasectomy?

A vasectomy is a surgical procedure in which a surgeon cuts the vas deferens. These ducts carry sperm from the testicles to the urethra. A doctor cuts them so they can no longer fulfill that function and so the sperm gets trapped in the testicles without an exit route.

Because sperm can no longer leave a man’s body, it isn’t possible for a man who underwent a vasectomy to impregnate a woman. This method is effective in 99.9% of cases and essentially sterilizes men. However, it’s important to remember that the sperm is the cell that results in pregnancy when joined with the female ovum. A man can have sexual intercourse, ejaculate and expel semen after a vasectomy. However, there’s no sperm in the semen, so fertilization is impossible.

A vasectomy is an outpatient surgery that’s easily performed in a clinic or a doctor’s office. It requires local anesthesia, which means the patient is awake during the procedure but doesn’t feel pain. The first thing healthcare workers do is shave and clean the scrotum, after which they anesthetize the area to do the intervention.

There are two ways to do a vasectomy: with an incision and without an incision. In the first case, a surgeon makes two small cuts with the scalpel in the upper area of ​​the scrotum. Then they cut and tie or seal the ends of the vas deferens and close the wound with stitches or surgical rubber.

In a vasectomy without an incision, the doctor finds the vas deferens and then injects an anesthetic. Then they make a very small hole in the same scrotum, link the ducts and cut a part of them. To finish, they seal the hole with a stitch or surgical rubber.

Continue reading: Do You Suffer from Retrograde Ejaculation?

Vasectomy: Before and after

Usually, this type of intervention requires minimal preparation. It consists of taking control over ingested medications and reducing or suppressing those that can deter coagulation. This usually takes place 10 days before the procedure.

After the procedure, men must use a scrotal brace for at least three or four days. There might be bruises and inflammation, but they usually disappear one or two weeks after surgery. Typically, a man can resume his activities within 3 to 7 days.

This is a very safe procedure, but there are risks. Normal discomfort includes pain and inflammation that can be controlled with prescription pain relievers or by putting some ice in the area. Consult your doctor if the pain is unbearable. In some cases, there could be an infection, but it’s usually easy to control with antibiotics. Fever is a sign of infection and requires immediate medical intervention. The same goes for bleeding or excessive inflammation.

Find out more: Five Tips to Enjoy a Fulfilling and Safe Sex Life

A vasectomy doesn’t affect a man’s sexuality in any way and anyone who’s undergone the procedure can have sex after a week or two. However, there’s still a chance of pregnancy during the first three months, so you might want to use other contraceptive methods during that period.

This procedure is sometimes reversible, but in some cases, it is not. The reversal is more expensive and complex, however, and there’s no guarantee that it’ll be successful. Likewise, note that even though vasectomy is a contraceptive method, it doesn’t prevent sexually transmitted diseases. Therefore, you might still want to use condoms with any new partners.

Link copied!
Interesting Articles
Treatments
What Is a Bronchoscopy and What Is It For?