Following a vegan diet doesn't mean that your meals should be bland and boring. Today, we'll propose two recipes for vegan empanadas that, besides being delicious, will fill your kitchen with irresistible aromas! 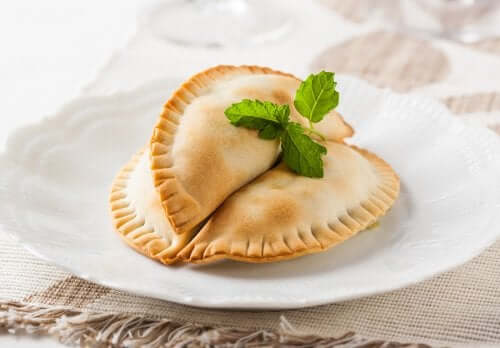 An empanada is a pastry that can be stuffed with practically anything. Thus, you can find sweet, savory, meat, fish, vegetable, and even fruit empanadas. Some people even make vegan ones. Don’t miss out on the two delicious vegan empanadas recipes we’ll share today!

Empanadas are delicious. The truth is that they’re actually one of the favorite snacks around the world. In addition, there are many kinds of baked or fried empanadas made with all sorts of fillings.

The main secret is the dough. Thus, they can be prepared with wheat flour or puff pastry. It all depends on what you like the best. The same is true regarding the filling.

Now, empanadas normally include ingredients that are incompatible with a vegan diet. For example, before putting them in the oven, they’re usually covered with a mixture of a beaten egg to ensure better consistency, color, and flavor. This is why many people ask themselves if it’s possible to make vegan empanadas.

Of course, it is!

Below, we suggest two recipes for vegan empanadas that are really easy to make. They’re delicious!

We recommend that you read: Three Delicious Recipes for Vegan Cheese

Make your own empanadas at home to choose the ingredients you like best, including those to make them 100% vegan.

Ingredients for these vegan empanadas:

This article may interest you: Homemade Chicken or Beef Empanada Recipe

You should be particularly careful when filling the dough. Make sure to not overfill them so they don’t open during baking.

Ingredients for these vegan empanadas:

To make the vegan empanadas:

Now you can enjoy some delicious vegan empanadas. Everyone will love them!

Easy Appetizer Recipe: Mini Empanadas
If you have a get-together coming up and you don't know what to make for it, one great option is whip up a tasty batch of mini empanadas! Read more »
Link copied!
Interesting Articles
Vegetarian and vegan
An Easy Recipe for Vegetable Couscous

Vegetarian and vegan
How to Make Vegan Stuffed Mushrooms