Find out everything you need to know about these wonderful empanada recipes and get motivated to make some! Great ready to treat your taste buds! 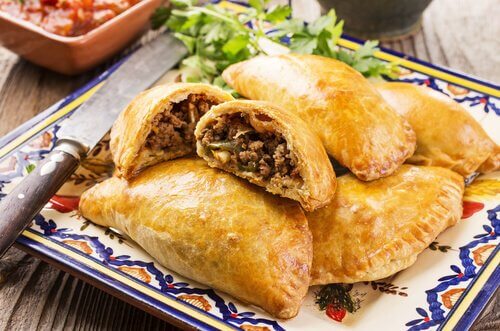 Chicken and beef empanadas are as delicious as they are easy to make. They’re a part of cultural and culinary traditions all over the world. Their origin, however, is not clear and there are many versions.

In many places, there are homemade recipes for beef and chicken empanadas. Every home and every region has its extra secret ingredient that makes them stand out.

In this article, we’ll take a look at a great recipe!

The origins of chicken and beef empanadas

Empanadas arrived in Spain thanks to the Arabs who borrowed the idea from the Persians. In other words, we’re talking about a type of food whose history goes way back.

Simply put, an empanada is a dough-covered stuffing, which can be made with an endless variety of ingredients. Even the dough’s preparation varies from one town to the next.

There are texts from 1520 that mention a seafood empanada.

Some of the most well known are the ones from Galicia, Chile, and Argentina. Venezuela also has its own version made with precooked corn flour that is then fried. However, the vast majority of empanadas are baked.

As there are many kinds of empanadas across the world, and there are also varying shapes and sizes. There are big and small ones; smaller ones are usually served as a snack or appetizer. There are medium-sized ones that are served as a breakfast. Then, there are larger ones that can be the size of a large plate.

What’s more, some empanadas are round, and others are crescent shaped. Empanadas from Galicia and Portugal come in the shape of a large pie. It can be cut and divided into various pieces.

The vast majority of empanadas use onion and garlic for a base; in other words, they’re usually savory. There are also sweet empanadas and others that combine both flavors.

Check out this article:Learn How to Enjoy Flavorful and Healthy Potatoes

Place it in the oven

Making the dough is simple and homemade recipes for chicken or beef empanadas are very distinctive. Even though empanadas have changed through time, their flavor remains.

There are many types of fillings and wonderful variations that include ingredients besides chicken or beef. However, homemade chicken and beef empanadas will always be the most popular ones.

If you opt for beef instead of chicken empanadas, the procedure will basically be the same. Follow the same steps; the size of the beef is at the discretion of whoever makes them. You can also use ground beef if you’d like.

A lentil and avocado tarte is an ideal recipe for those who wish to follow a vegan or vegetarian diet.…

Do you only eat popcorn when you go out to the movies? Do you buy it ready-to-eat or are you…

Appetizers and main courses
How to Make Argentina Stuffed Milanesa

Milanesa is a typical Argentine dish and is particularly popular among the youngest of eaters. And if you serve it…