The Treatment of Tenosynovitis

Tenosynovitis is painful and may lead to loss of movement. Find out more about the treatment of tenosynovitis in this article! 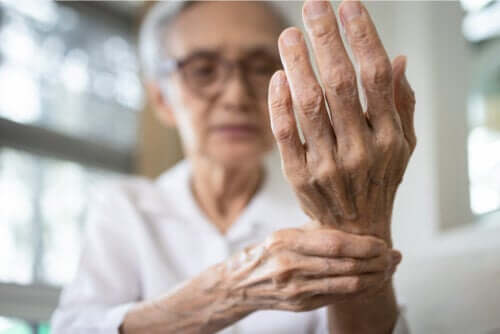 A tendon is a type of fibrous tissue that connects the muscles and bones of the body. They’re essential to control the movement of different parts of the body.

This pathology has a high prevalence, not only in athletes but in the general population as well. The timely treatment of tenosynovitis is essential in keeping the affected tendon from losing its usefulness in the future.

Tenosynovitis consists of the inflammation of the synovial sheath, which is an area that covers and protects the tendons. Under normal conditions, this structure produces the synovial fluid that keeps the tendon lubricated.

When an injury occurs in this area, it can alter the production of the fluid. Also, the sheath itself becomes inflamed. Both events, which make up tenosynovitis, lead to the tendon not functioning as it should, losing its mechanical usefulness.

Damage to any tendon can translate into a mobility dysfunction. For example, if a tendon that’s part of the shoulder joint is injured, the arm will unlikely be unable to move. At the same time, the individual may experience intense pain during movement.

Athletes are among those who are most prone to suffering from tenosynovitis.

The causes of tenosynovitis

The truth is that this pathology has numerous etiologies or causal agents. In general, doctors make a distinction between acute and chronic tenosynovitis, depending on its duration. All of them cause pain upon palpation as well as the limitation of movement.

It’s important to emphasize that, as we pointed out at the beginning, it’s not a condition exclusive to athletes. In fact, anyone can suffer from this pathology. However, a large part of the cases indeed occurs in individuals who constantly perform repetitive movements.

The same happens when it comes to prolonged postures, such as standing for a long time. In some cases, tenosynovitis can result from calcium deposits, gout, or even high amounts of cholesterol.

Quervain’s tenosynovitis is one of the best-known types. It affects the wrist tendons involved in the movement of the thumb. In some people, this condition can be the result of an infection.

What does the treatment of tenosynovitis involve?

The treatment of tenosynovitis varies, mainly, according to the cause behind it. The goal is to reduce pain and inflammation. Therefore, the first measure that patients should take is to rest.

It’s best to avoid moving the affected area as much as possible. In some cases, doctors immobilize casts, splints, or bandages. Also, medical treatment often involves the use of anti-inflammatory drugs.

For example, non-steroidal anti-inflammatory drugs (NSAIDs), such as ibuprofen, are a common form of treatment. If the pain goes away, doctors may even resort to a corticosteroid infiltration. Applying cold compresses to the area helps improve inflammation. At the same time, when the cause is an infection, then the treatment of tenosynovitis will also include specific antibiotics.

An article published by Manuela Bertrán University explains that transcutaneous electrical nerve stimulation is an option for treating the pathology in cases of Quervain’s tenosynovitis. It’s a technique that focuses on pain relief.

Another study from Frontera University states that the use of extracorporeal shock waves improves the inflammation that occurs in the process. Both are novel techniques that represent an advance in the treatment of tenosynovitis.

Other recommendations for the treatment of tenosynovitis

Basic treatment of tenosynovitis may improve the situation, but recovery may not be complete. In many cases, rehabilitation and physical therapy are necessary to improve and re-strengthen the area. Weaknesses that may persist are harmful, especially in athletes who need to return to training and activity.

In fact, rehabilitation and physical therapy also help to prevent future injuries. In some cases, the pathology can become recurrent and the only alternative ends up being surgery. The surgical approaches vary and it will depend on the orthopedic surgeon to choose the method that best suits each case. In general, there’s a tendency toward arthroscopies based on small incisions that leave a minimal scar and have a very low impact on the tissues.

Immobilizations reduce pressure on the soft tissues of the joints to promote healing.

Although the causes vary, there are general measures to prevent tenosynovitis. The main thing is to avoid repetitive movements in our daily lives. Also, it’s important to strengthen the muscles to improve joint stability.

Warming up in sports activity and adapting training according to individual capabilities are essential to reducing the chances of future injuries. Pushing the body too far is often a hidden factor behind many of the traumas that lead to painful consequences.

To prevent the tendon from suffering due to an infection, it’s essential to take into account hygiene and correct wound healing. However, if there’s any sign of microbial colonization, make sure to see a doctor.

Advice on How to Sleep with Shoulder Tendonitis
Sleeping with shoulder tendinitis can be quite uncomfortable. That's why it's important to know what position to adopt and how to reduce the pain. In this article, we're going to share some recommendations with you. Read more »
Link copied!
Interesting Articles
Treatments
Myths about Breast Surgery