Several studies support the medicinal properties of tomatoes. In particular, there's evidence of its contribution to lowering high blood pressure. Continue reading to learn more about it. 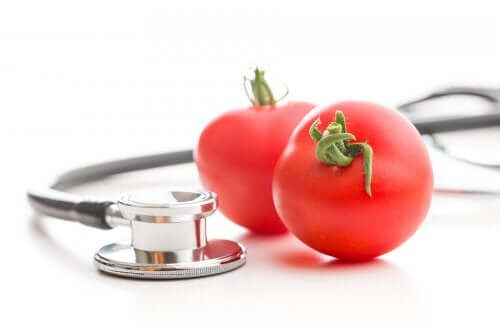 High blood pressure, or hypertension, is known as the “silent death” disease. This is because this illness often goes unnoticed despite its seriousness. Estimates indicate that up to 20% of those affected don’t even know they have this problem.

Between 90 and 95% of high blood pressure cases correspond to primary or essential hypertension. This means they’re not due to another disease. The remaining percentage is related to other conditions or caused by medication or pregnancy.

The symptoms of high blood pressure aren’t very specific and, in many cases, people don’t even notice them. However, there may be pulsing in the chest or head, dizziness, and discomfort in some cases but there are no strong manifestations in general.

The heart pumps blood throughout the body through the arteries, veins, and capillaries. In turn, the blood puts pressure on the walls of the arteries as it circulates. Some devices measure the strength of that pressure, and we refer to the result as a blood pressure index.

There are some small arteries called arterioles that regulate blood flow in the body and sometimes become narrower. Science can’t explain the exact reason why this happens. Thus, the heart has to work harder to pump the blood under these conditions. In fact, it leads to increased pressure in the blood vessels and leads to high blood pressure.

Chronic hypertension causes significant damage to the body and they can harden due to the pressure inside the arteries. Thus, it can lead to a heart attack or stroke. It’s also possible for the heart to become enlarged and damage the eyes or kidneys.

Read Did You Know That Walnuts Reduce Blood Pressure?

A study on the common tomato

The Soroka Medical Center in Israel conducted a study on the relationship between tomatoes and hypertension. The interest in investigating the subject had to do, in part, with the fact that Italians have a lower prevalence of hypertension than people in other parts of the world.

To verify the hypotheses, the researchers selected a group of patients who suffered from hypertension but didn’t respond well to medication. They gave them a series of tomato supplements to consume over four weeks. Amazingly, all group members showed significant improvement.

This was due to the fact that tomatoes contain lycopene, a powerful antioxidant associated with the prevention of heart disease. It also protects arterial health. Apparently, the idea is to consume four tomatoes a day, either whole or in various preparations.

A study on tree tomatoes

Tree tomatoes, also known as tamarillo, or tamamoro are also great for regulating high blood pressure. This fruit grows in tropical areas mainly and people consume it as juice.

In the year 2016, several universities and institutions in Ecuador and Venezuela conducted a study on the medicinal properties of tree tomatoes. The results indicated this fruit has a positive effect on lowering blood pressure in people diagnosed as hypertensive.

Learn about a Passionflower Remedy to Control Blood Pressure

How to use tomatoes for high blood pressure

As noted above, people with hypertension should ideally consume four raw tomatoes a day. However, it could become monotonous and wouldn’t be very pleasant after a while. The good thing is there are delicious ways to introduce a significant amount of tomatoes into your diet.

The first and perhaps most obvious way to consume them is as a homemade tomato sauce. Tomatoes pair well with almost everything. In fact, you can add them to beans, to pasta, and to pretty much any salad. They add a wonderful touch to just about any dishes.

Furthermore, tomatoes maintain their nutritional properties regardless of the preparation. This is why you can juice them or make tomato soups or add them to salads.

Note that tree tomatoes are almost always consumed in juice form. However, you can use it in sweet or savory sauces or preserves.

Are you hypertense? As you have just learned, tomatoes can be a great complement to restore your pressure back to its optimal levels. However, you must keep in mind that the consumption of this fruit isn’t a replacement for any of the medication prescribed by your doctor.