The Symptoms of Andropause Every Man Should Know

The symptoms of andropause manifest at a certain age when testosterone levels begin to decrease progressively. It can affect the quality of life of many men. 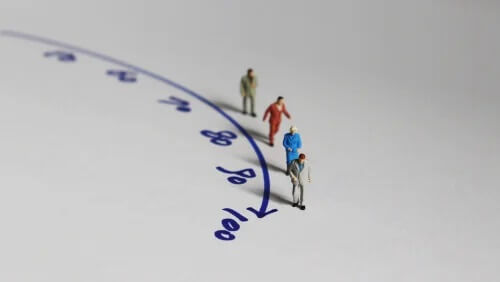 Men also experience symptoms of something similar to a menopause, which goes by the name of andropause. They’re similar processes and both stages have to do with age and the decline of certain hormones. The symptoms are different though.

Andropause is a drop in testosterone production at a certain age. Testosterone is the hormone produced in the testicles and adrenal glands and it’s responsible for numerous functions.

You may already know that testosterone helps maintain the sexual drive. It also influences bone health and even strength and energy. However, unlike menopause, the onset of andropause doesn’t mean that men are no longer fertile.

Some men aren’t even aware that they’re going through this process. Today’s article will explain what andropause is and what its most frequent symptoms are. It’ll also discuss the various treatments.

What does andropause consist of?

As we mentioned above, testosterone is the hormone produced in the testicles and adrenal glands. Many people only associate it with sexual functions, although it’s also involved in many other parts and functions of the human body.

First of all, testosterone influences bone and muscle mass. It helps maintain muscle tone and it provides a sense of energy and well-being. It’s also related to the growth of body hair.

Women also have testosterone, although at much lower levels than men. This hormone begins to progressively decrease in men after the age of 30.

Estimates indicate that testosterone levels have decreased enough by the age of 45 to notice some symptoms of andropause. In fact, the concentration is almost half that of younger men by the age of 50.

However, it isn’t just about aging. There are many other factors that can accelerate and exacerbate andropause. For example, the consumption of drugs or alcohol could have a significant influence. The same applies to stress or obesity.

Do you know What Testosterone Deficiency Syndrome Is?

The symptoms of andropause

Andropause is a slow and progressive process. Many men aren’t even aware of it and don’t experience any symptoms. However, others experience major changes. In fact, it’s common for them to be more sensitive than normal, or in a bad mood.

One of the most common symptoms of this process is a lack of energy. Men tend to be more fatigued and have less muscle strength. In addition, it’s often followed by sleep disturbances, so this fatigue is even more accentuated.

It’s important to note that the greatest impact of this process is usually in the sexual sphere. In fact, this is what usually alerts men first. It’s normal for sex drive to decrease and to have difficulty maintaining an erection.

Even ejaculations are usually smaller in quantity. Some men experience dizziness, headaches, and tingling in the extremities. For this reason, a doctor may prescribe treatment for these.

Have you wondered What’s Cryptorchidism or Undescended Testicles?

The symptoms of andropause can greatly influence the quality of life in some cases. There are various treatment options set in place for this purpose. The goal is to restore adequate testosterone levels to reduce symptoms.

This hormone can be administered in different ways: intramuscular injections, gels, transdermal patches, and even pills.

It’s a delicate treatment though. This is why you must take other health factors into account. The condition of the prostate, for one. This is because certain prostate problems are influenced by increased testosterone.

Ideally, you must always consult a specialist as it’s important to explain all the symptoms in detail in order to find out what the best option is for every individual case.