The Psychological Cost of Giving Everything in a Relationship

Giving everything when the other person doesn't commit like you do can be destructive to your psychological well-being. Be careful! 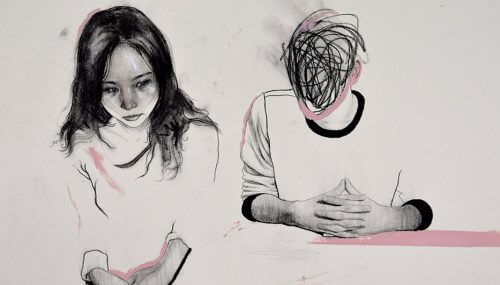 Giving everything in a relationship can have a brutal psychological cost. However, it’s something that we do much more than we may think because that’s what we were taught.

Sometimes giving everything in a relationship is almost like an obligation we put on ourselves. If we don’t do it, people blame us. If the relationship fails, we feel like it’s our fault.

This article may also interest you: How to Build a Great Relationship with Your Partner

Giving everything in a relationship due to social pressure

One of the beliefs that push many to give everything in a relationship is the false belief that we have to give 100% of ourselves in order to show the other person that we love them with our whole heart.

The big problem is that you may give 100% most of the time, but what about the other person? Sometimes they don’t even give 20%!

This wears you down. You try to keep your foundation stable, a foundation that sooner or later will go down.

Then, you reach a breaking point. You can’t be the only one giving in a relationship. In the end, it will be ruined, and you’ll be the one that feels guilty.

All of the social pressure that pushes us to wear ourselves down so much for our relationship creates a blindness in us where we don’t see that the other person isn’t doing anything and that it may be time to cut the cord.

You carry an enormous weight on our shoulders. In addition, you may even be unable to open your eyes to see what an ideal relationship should look like: a relationship where each person gives 50%. This is a healthy bond for both that can lead to a fulfilling relationship.

Loving someone doesn’t have to mean sacrifice. It doesn’t mean giving yourself until there’s nothing left to give.

Loving someone isn’t the same as a battle. It isn’t constant demonstrations of love so that no one can think otherwise. Love – true love – never makes a person unwell.

Want to learn more? Find out The Signs of Dissatisfaction in a Relationship

Expectations pull us into a downward spiral of pain

Along with all of the beliefs we may have about relationships, we also have expectations. Many of them are influenced by our environment, but others come from that stage of love where we put a blindfold over our eyes.

For example, many of us have unrealistic expectations. This includes the expectation that a relationship can overcome any hard time or that everything will go well in spite of all of our problems. This can make us slaves to our own relationship.

We don’t open our eyes to see these problems. Often, we treat all adversities the same, without distinguishing the differences.

We dream that we’ll keep moving forward no matter what because love conquers all. However, love can’t conquer everything. It’s either there or it isn’t. Love isn’t a battle or a constant source of pain.

When a relationship runs out and turns into a huge responsibility, it’s important to open our eyes and stop and see if we’re on the right path.

Because love should be beautiful, right?

In love, things are clear

We have to get rid of the beliefs and expectations ingrained in our minds that make us see love as something that is beautiful but destructive.

Love doesn’t mean sacrifice or a battle. If so, we’re not talking about love. The consequences could be low self-esteem, low self-appreciation, and even depression.

Loving someone doesn’t mean giving 100% of yourself while the other person isn’t giving anything.

Sooner or later, you’ll either require that they change and start giving the same you’re giving or you’ll get so tired that the relationship will weaken and weaken until it finally breaks apart.

You must reflect on what it really means to “give everything in a relationship”. It sounds good in the movies, but it’s completely different in real life.

You have to learn to see love as something that doesn’t have to hurt. Take the blindfold off once and for all!

How to Find Lasting Love in a Relationship
Lasting love starts with one's own self since self-esteem is the base of being able to establish solid and mature relationships that can last a lifetime Read more »
Link copied!
Interesting Articles
Conflicts
The Fear of Abandonment in Romantic Relationships