What are the Signs of Dissatisfaction in a Relationship?

Dissatisfaction can occur when both members of the couple have different expectations. In that case, it's important to catch it early on and decide if it's worth it to continue the relationship. 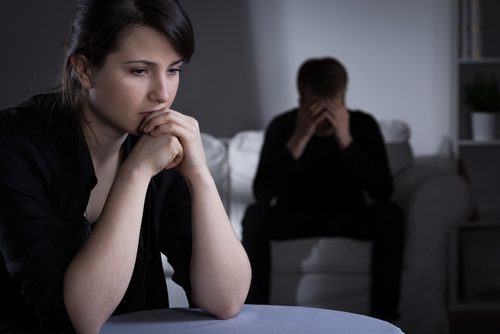 Have you noticed the rise in separations and divorce in recent years? This upward rise might make you worry, or it might make you throw yourself completely into a commitment with another person. Today, we’re going to talk about the signs of dissatisfaction in a relationship so you can identify them and work through them.

Dissatisfaction in a relationship: What causes it?

From the day we’re born, bonds of affection are very important to us as human beings.

In other words, if you love yourself, it will be much easier to interact positively with another person.

On the other hand, a negative self-image can lead to rejection, dependency, and unhealthy jealousy. Oftentimes, that ends up causing breakups and separations.

The majority of marital problems come from one member of the couple feeling a “loss of freedom.” They can’t act like they want to or are tired of having to constantly censure themselves.

Of course, we can’t forget to talk about the idealistic period we all go through at the beginning of a new relationship.

As soon as that vision of perfection starts to diminish, fights and starts of dissatisfaction might start to plague the relationship.

Signs of dissatisfaction in a relationship

At the beginning of relationship there’s talk of love, passion, and connection. As time goes on, the words most commonly used are commitment, affection, and security.

The signs of dissatisfaction could show up at any stage of the relationship, but they’re most likely to appear when the idealism goes away or you start living together.

These are indicators that you’re not completely satisfied with our relationship.

But, if you’re more proactive, you can keep these small differences turn into a cause for separation.

Childhood Attachment and its Importance in Adult Life

Not feeling supported by the other person

One of the most wonderful ‘benefits’ of being a part of a couple is feeling supported. This could be at work, on a personal project, when starting a new career, or in little things like moving the furniture or cutting your hair.

This doesn’t mean that you need the other person’s permission to do something for you to feel good, it just means you want them by your side when you need them.

So, if you feel your partner isn’t there for you during important moments, this could be a reason for your dissatisfaction.

It’s true that when you live with someone you have to adjust so that daily life can be more harmonious and pleasant. But things can get pretty ugly when just about everything turns into an argument. This is one of the clearest signs of dissatisfaction in a relationship, but it’s something you can work through.

Making a mountain out of a mole hill is one of the sign of dissatisfaction because you’re using the fight as an excuse to  say how you feel. Communication is absolutely vital if you want to avoid this or work through it.

Saying no to everything

It can be exhausting to always get a “no,” no matter what the plans are. It could be an invitation to the movies, dinner with friends, to go on vacation, or buy a new car.

Constant refusals are an alarming sign that you definitely shouldn’t ignore.

Not having the same ideals as a couple

While it’s healthy for each person to have their own opinion about different topics, there’s one in particular that’s dangerous to have different thoughts about: ideals in the relationship.

If one person wants to have a family and the other doesn’t want children, or if one wants to travel the world and the other wants to settle down in one place, things can get complicated.

Plus, when your ideals run into reality in the relationship, what you see might not only turn into dissatisfaction, but also an erroneous perception of the other person.

You turn into someone who feels closed off, moody, or irritated with everything that doesn’t line up with your values.

As you go through the different stages of a relationship, your wants and goals change.

But, it’s possible that one has stayed behind in the previous stage, and that can cause dissatisfaction.

For example, one might be thinking it’s time to get married and start a family, while the other may feel that dating is better.

Evolution in a relationship is fundamental and has to do with reciprocity, confidence, respect, and of course, love. When one of these pillars is weak it’s very difficult to feel happy.

5 Gestures That Happy Couples Do Before Going to Sleep

The other person has too much power

Having too much power means displaying erratic behavior towards the other person, and not giving them the opportunity to think and act for themselves. This includes things like telling them what to wear, what to eat, or what job to take.

There’s a fine line between wanting to help someone and interfering in their life, and you should be very much aware of that and avoid it.

If someone feels dissatisfied with what the person they have, they will try to change them. How? Through their hairstyle, their clothing, or the friends they allow them to have.

So, now that you’ve learned some of the signs of dissatisfaction in a relationship, you can work towards a stronger, healthier bond with your current or future partner!

Daflon is the trademark of a medication composed, among other substances, of two active ingredients: diosmin and hesperidin. Diosmin is…

It's essential to know our blood type, also called blood group. There are 4 main blood types: A, B, 0,…