The Presence of Nitrites in Urine

The presence of nitrites in urine is indicative of a urinary tract infection. Although medical professionals don’t always request this test, they may use it to guide their diagnosis. In this article, you’ll learn all about it. 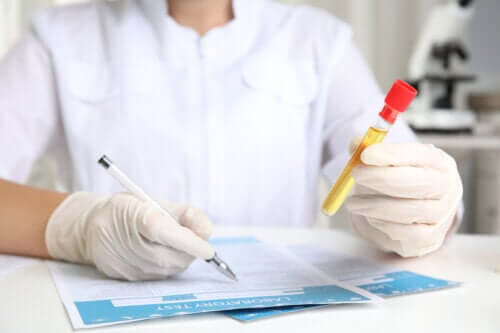 Nitrites in urine are substances that help doctors diagnose a suspected urinary tract infection. Normally, there shouldn’t be any nitrites in the urine of humans. Thus, their presence is abnormal.

Urine is the liquid the kidneys produce to expel useless waste from the body. Through the outward expulsion of urine, it’s possible to filter the blood.

Nitrates are among the substances that are expelled through the urine. Although they sound like nitrites, the aren’t the same. Some are normal, while others aren’t. When the nitrates in urine encounter certain bacteria, they turn into nitrites. Therefore, the nitrite test is associated with urinary tract infections.

However, nitrites don’t only exist due to bacteria. Substances such as potassium nitrite or sodium nitrite are employed in the food industry. For example, they do this to artificially enhance the red color of meat.

Vegetables, on the other hand, usually contain nitrates. Green vegetables, beets, and radishes are rich sources of nitrates. That’s why the World Health Organization (WHO) establishes a daily limit intake of no more than 3.7 milligrams per kilogram of weight.

The nitrates the body can’t use and excretes through the urine can be taken by certain bacteria to become nitrites, as we stated above. However, not all bacteria have that ability. Nevertheless, the most common bacteria that cause urinary tract infections, such as the ones we’ll mention below, do have it. These include:

When do doctors order the nitrite test?

Urinary tract infections have characteristic symptoms that make medical professionals suspect their presence. Thus, doctors orient their diagnosis towards cystitis when the patient tells them of certain classic symptoms. The symptoms include:

Once the medical professional requests a complete urinalysis, including nitrites, the patient has to collect a urine sample in a sterile container. The container must be sterile to ensure that the biochemist accesses reliable results.

The patient must discard the first urine stream in the toilet and then proceed to collect the second part. If the patient takes the sample after several hours without urinating, it’ll be more reliable. For example, it’s best in the morning when they just woke up.

Then, a biochemist introduces a test strip in the urine to analyze it. The test strips contain substances that change color when they detect what they want to measure. Generally, test strips don’t measure a single element, but instead contain various reagents to make the process more effective. A single test strip can detect nitrites, glucose, esterase, and proteins.

Although it depends on the brand, urine nitrite reagents usually turn pink when they’re detected. However, each test strip manufacturer specifies the colors and their interpretation on the labels.

How doctors interpret the results

So what happens if the patient tests positive for nitrites in urine?

Let’s say that a patient decides to visit their doctor due to a burning sensation during urination and fever. Thus, the medical professional requests a urinalysis and the laboratory reports that the patient tested positive for nitrites. The positive result suggests a urinary tract infection. If we add that the patient tests positive for leukocyte esterase, then there’s a diagnosis.

Learn All about Urine Abnormalities
There are several types of urine abnormalities. Don't hesitate to consult your doctor if you're seeing changes in your urine. Read more »
Link copied!
Interesting Articles
Anatomy and physiology
What Is the Egestion Process?

Anatomy and physiology
The Different Types of Nose Shapes: What’s Yours?

From an aesthetic standpoint, the center of the face is very important for the harmonization of facial features. This is…

Anatomy and physiology
What Is the HER2 Receptor?

HER2, or human epidermal growth factor receptor 2, is a gene that can influence the development of breast cancer. When a patient gets a pathology report, it should include information…